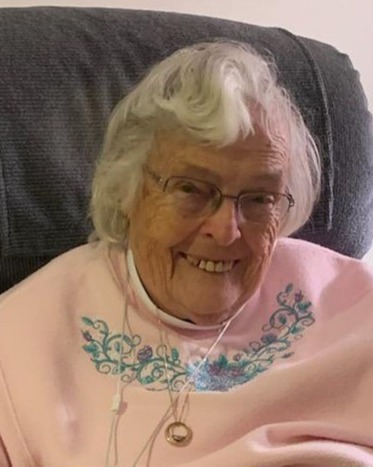 Joan Audrey (Dunfield) Bowen, age 91, passed away surrounded by her loving family on Friday, October 14th.  Joan was born in Murray Corner, New Brunswick, Canada, and emigrated to Wollaston, Massachusetts, during high school.  She graduated from North Quincy High School.  She eventually became a naturalized US citizen although still considered herself a proud Canadian right to the end.  In 1963 she moved to Weymouth, where she resided for the rest of her life.

While being a homemaker for her family was her top priority, she spent many years in various teaching related roles. She was a nursery schoolteacher, a Sunday schoolteacher, and the Cerebral Palsy of South Shore Area infant program assistant.

Joan was an avid and talented knitter, particularly of personalized Christmas stockings, as well as a quilter, creator, and teacher of other handcrafts. Over the years, she also enjoyed square dancing with The Lofty Squares and donning her alter persona – Buttercup the clown – with the South Shore Joeys.  Joan and Frank enjoyed camping and travel, including spending some time during the winter months in Florida, exploring in their travel trailer, and cruising.  She was an active lifetime member of the First Baptist Church of Wollaston.

There will be no public services.  Frank and Joan’s burial wishes were to be cremated, their remains combined, then scattered at sea.

If you would like to leave a message for the family, please sign the Guest Book below.

To order memorial trees or send flowers to the family in memory of Joan A. Bowen, please visit our flower store.