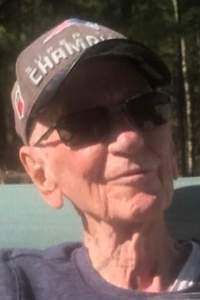 Donald R. Weber of Hanson Passed away peacefully surrounded by his family on July 20, 2022, at the age of 86. Don was born, raised, and educated in Quincy graduating with the North Quincy high school class of 1953. After graduating he spent time working at the first Dunkin Donuts in Quincy before moving into his career as a union typesetter for the Boston Herald, Patriot Ledger, and the Christian Science Monitor. Don was also an auxiliary police officer and dispatcher for the Hanson Police Department for many years and was known as "Disaster Don" because every time he walked into the station an incident in the town would occur.

Don was a sports buff. He loved to cheer for Boston Sports teams. His grandmother used to take him to Boston Brave games and even though they moved to Atlanta, he was a Braves fan at heart. He enjoyed baseball so much that he coached his children’s baseball and softball teams. When not watching or coaching sports, Don could be found spending time with his family. He enjoyed camping up and down the east coast and raising chickens in his earlier years. Don was also a proud member of the Weymouth Elks Lodge since 1976 where he was a past Exalted Ruler, past District Deputy of the Circle District and a Life Member. All of these titles he held with pride. Don was also Mason since 1958 where he was a past Master of Delta Lodge. Above all else Don was a family man, and truly a gift to everyone he came across.

Don was the son of the late Byron and Mildred Weber. He was predeceased by his adoring wife Arleene Weber and his siblings Mildred Mattson and Byron Weber Jr. Don was the loving father of Donna Keith, Marc Weber and his wife Pamela of Raynham, Michelle Perry and her late husband Robert of Berkley and Sharon Yakavonis and her husband Joseph of Hanson. Don was also the devoted grandfather of Marc Jr., Ryan, Joshua, Breanna, Nicholas, and Lauren. He is also survived by many in-laws, nieces and nephews.

Relatives and friends are respectfully invited to attend a visitation for Don on Wednesday, July 27, 2022, from 4-7 in the evening at the C.C. Shepherd Funeral Home, 134 Pleasant St Weymouth. A celebration of life will take place in the funeral home at 9:30 AM on Thursday, July 28,2022 before the funeral mass at St. Francis Xavier Church in Weymouth at 10:30AM. Burial will follow at the Knollwood Memorial Park in Canton. In lieu of flowers donations may be made in Donald memory to the American Cancer Society https://www.cancer.org/involved/donate.html or to the American Diabetes Association https://www.diabetes.org/?form=Donate.

To order memorial trees or send flowers to the family in memory of Donald Weber, please visit our flower store.