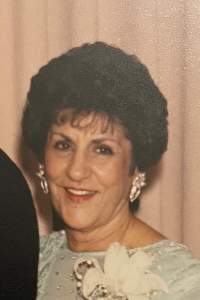 Dolores M. “Do” Raeside (Biagini), age 88, of Weymouth MA passed away peacefully with her family by her side on Sunday, April 24, 2022. Dolores was born and raised in Quincy MA. She graduated from Quincy High School in 1951 then attended Burnett Business School where she received an associate degree in Secretarial Science.

Dolores met her husband David “Scotty” Raeside in the mid-1950s at a dance at Mosley’s in Dedham. They were married on Oct 5, 1958 and honeymooned in Washington DC. Dolores and Scotty settled in Weymouth in 1963 where Dolores has resided ever since.

Dolores enjoyed a fulfilling career in the Education field. As a young mother she worked for the Weymouth Public School Dept delivering school supplies to all the town’s schools. She went on to work for the Weymouth Teachers Association where she knew many town teachers (not a good thing for her sons). Beginning in 1980, Dolores became Office Administrator for the National Education Association in Braintree MA, a job she loved until retiring in 1997. Due to her natural caring demeanor, Do was known as “Mom” at the office.

Dolores was a big sports fan. She especially loved the Red Sox and Patriots (she would not admit it, but she had a crush on Tom Brady). She would rarely miss an opportunity to see her sons or grandchildren’s sports games. Do was seen navigating soccer fields across the south shore, wrapped in a blanket at local hockey rinks, cheering in the stands at basketball games, even watching her grandson at skate parks.
Mostly, Dolores cherished spending time with family at the many memorable occasions that took place over the years. She particularly enjoyed unwinding with her family at Bay View Beach on Cape Cod.

Dolores was predeceased by her husband David “Scotty” Raeside. She is survived by her loving children Scott Raeside and his wife Susan Roussell of Norwell; Glenn Raeside and his wife AnnMarie of S. Weymouth; her cherished grandchildren Brad, Alex, Chris, and Bella. She is also survived by her sister and best friend Maureen Seviour, her nephew and godson Charles Seviour and many more nieces, nephews, and cousins whose lives were touched by her.

Relatives and friends are respectfully invited to the visitation for Dolores on Friday, April 29, 2022 from 9-10:30am at C. C. Shepherd Funeral Home located at 134 Pleasant Street (Columbian Sq.) Weymouth, MA. After, a funeral mass in honor of Dolores will take place at Immaculate Conception Church in Weymouth and will begin promptly at 11:30am. Cremation will follow. In lieu of flowers please make a donation to the Dementia Society of America at www.DementiaSociety.org.

To order memorial trees or send flowers to the family in memory of Dolores Raeside, please visit our flower store.