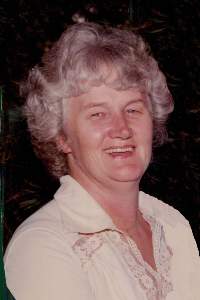 Sarah “Sally” Moorhouse (Gannon), age 87, of S. Weymouth passed away at home surrounded by her loving family on Monday, April 4, 2022. Sally was the eldest daughter of Coleman and Sarah (Griffin) Gannon. She was born in County Galway, Ireland and spent her early years in both Ireland and England.

She met and married her husband while working in London. Being a military family, they traveled to many countries. Sally’s girls were born in Africa, Cyprus, and Germany.

In 1963, Sally and girls joined her parents in Dorchester, but shortly after they moved to Abington. In 1980 Sally moved to S. Weymouth with her companion Garry McDermott until his death in 1990. She lived in Halifax until 1998 when she moved back to South Weymouth. Sally loved dancing, playing cards, knitting, bowling, swimming and fishing.

She began her work in America at Owens News and then Bemis Drugstore in Abington, but spent 25 years working at South Shore Hospital, in various roles, but her favorite was being a Nursing Assistant in the Birthing Unit.

Sally was preceded in death by her sister Peggy and her beloved brother Curly. She had a special bond with her sister-in-law, Joan Gannon. She was the beloved aunt of Patrick, Susan, Maura and Sara, as well as many great nieces and nephews.

Relatives and friends are respectfully invited to the visitation for Sally on Monday, April 11, 2022 from 9am-9:45am in the C. C. Shepherd Funeral Home located at 134 Pleasant St. (Columbian Sq.) Weymouth, MA. A Funeral Mass will take place at St. Bridget's Church in Abington at 10:30am followed by burial in St Patrick’s Cemetery in Rockland. In lieu of flowers donations may be made to Norwell VNA and Hospice at 120 Longwater Dr. Norwell, MA 02061.


To order memorial trees or send flowers to the family in memory of Sarah 'Sally' Moorhouse, please visit our flower store.