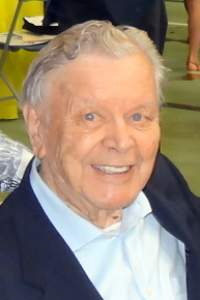 Edward Albert Whittaker passed away March 30th, 2022 at Queen Anne Nursing Home in Hingham at the age
of 101.

Born in Edinburgh Scotland, Ed grew up in New Haven CT and was a South Weymouth resident for 65 years.
Ed graduated from Boston University in 1949 with a B.S. in Journalism. A World War II veteran he was
awarded several citations including the Combat Infantry Badge and the Bronze Star. He served in the North
Pacific and Europe. He was editor of a Milton newspaper, a correspondent for the Boston Herald Traveler and
cofounder of The Quincy Sun. Following his journalism career, he served the American Cancer Society as
Southeastern Area Director and Blue Cross and Blue Shield of MA as a Media Officer.

Ed enjoyed fishing on Cape Cod and Florida’s Gulf Coast where he spent memorable family vacations getting
“picked clean”. He wrote poetry, song lyrics and senior humor for the Weymouth Senior Center where he
reveled in a community of youthful seniors. In 2015 he composed the winning slogan for the Center’s website
and newsletter: “Friends, Health & Cheer - It All Starts Here”! An avid reader, birdwatcher and wordsmith, Ed
had a keen interest in current events. Ed was often found on a stool at Bob’s Muffin Shop and dancing to the
Whipple Snappers at the Senior Center- on what he called his “best day”. His gusto for life and fierce love of
family will leave a hole in many hearts.

Services for Ed are in the care of C.C. Shepherd Funeral Home, Weymouth. A private burial will be held at Bourne National Cemetery on April 8th. A Celebration of Life will be announced at a later date by the family. Donations in Ed’s memory can be made to Weymouth Elder Services.

To order memorial trees or send flowers to the family in memory of Edward Whittaker, please visit our flower store.