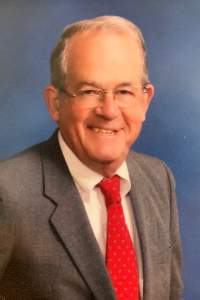 On March 16, 2022, Robert J. O’Flaherty, loving husband and father of three, passed away at the age of 87 in Hingham, Massachusetts. Bob was born in Cleveland, Ohio and attended Yale University. Bob met his wife, Lucy, in New York City. His international marketing career encompassed many technologies developing channels and markets for GE, Motorola, and Phillips. Bob’s work allowed him and his family to experience the world. During their multi-year overseas assignments, they lived in Venezuela, London, and Tokyo. They established homes in Lynnfield and Medfield Massachusetts, Waynesboro Virginia, and Manlius New York. In each place, Bob and Lucy made life-long friends, collected local art, and explored.

Bob was dedicated, organized, and driven to learn. In his free time, he enjoyed trading on the stock market, playing tennis, and tackling an expanding list of house projects for the beloved Pocasset summer home. He was generous with his time and support for his children, colleagues, mentees, and friends. Bob was often on the move: flying worldwide for business, managing the tennis ladder, and organizing family ski weeks. He carried that same spirit into his retirement on Hilton Head and Pocasset: volunteering in the community, leading Habitat for Humanity house building projects, and traveling with Lucy.

A lover of good food, wine, and conversation, Bob hosted many at the dining room table, or the sunset cocktail hour on the Pocasset porch. He particularly enjoyed the multi-generational dinners that could not end before the lobster was properly divided, many subjects discussed, and his glass absolutely empty.

Bob was preceded in death by his parents, Rod and Peggy. He is survived by his wife Lucy; his twin brother Tom; his children, Douglas, Anne and Ken; six grandchildren to whom he was known as “Grandfather”; and a loving collection of nieces, nephews and cousins. We know the first and the last ski run will always be with you.

A memorial service for Bob will be held at St. Barnabas’s Episcopal Church in Falmouth Massachusetts on June 4th at 2pm. In lieu of flowers, the family requests donations be made to the charity of your choice in Bob's name.

To order memorial trees or send flowers to the family in memory of Robert O'Flaherty, please visit our flower store.