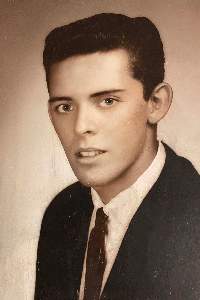 Wayne E. Sabean, age 76, of Weymouth passed away on March 2, 2022 after a long illness. Wayne was raised and educated in Weymouth graduating Weymouth High in 1964. He served in the Army for four years then attended Umass Boston where he received a degree in accounting. Wayne worked as a security guard for Proctor and Gamble which became Twin Rivers Technologies where he worked his way to Captain. Wayne retired in 2008 and loved movie, trips to Foxwoods, and was an avid bass fisherman.

Relatives and friends are respectfully invited to the visitation for Wayne on Monday, March 7, 2022 from 9-10am in the C. C. Shepherd Funeral Home located at 134 Pleasant St. (Columbian Sq.) Weymouth, MA. A funeral service will take place immediately following the visitation at 10am, followed by burial in the Massachusetts National Cemetery located in Bourne.

To order memorial trees or send flowers to the family in memory of Wayne Sabean, please visit our flower store.