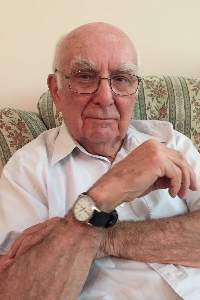 Donald E. Pace, age 87 of Weymouth, passed away with his loving family by his side on Thursday, February 3, 2022. Donald was born in Weymouth to Henry and Ruth (Crane) Pace and resided there his whole life. He graduated from Weymouth Vocational High School in 1951, then immediately joined the Marine Corps at age 17 and served for three years. Upon returning to Weymouth, he married his high school sweetheart, Marianne. They raised a family and would have celebrated their 66th wedding anniversary in April.

Don worked as a printer for The Smith Print in Norwell for 45 years until his retirement in 1998. After retiring, he then worked at South Shore Hospital as a concierge for 19 years. He loved spending time with his family, going to Castle Island, long-distance biking, and walking on Nantasket Beach. For 15 years, Don organized Christmas parties for the families of the Head Start program at Heritage UM Church in Braintree.

Donald is survived by his beloved wife Marianne (Goldsworthy) Pace, his loving children, Sharon Sabado and her husband Bey of Plymouth, Matthew Pace and his life partner Tina Oliveira of Halifax, and Lauren Gallagher and her husband Jim, of Norwell. He is predeceased by sons Dana and Jeffrey Pace. He is also survived by grandchildren Marianne Sabado, Mallory Sabado Anderson and her husband Eric, Robin Sabado, Tara and Dylan Gallagher, Anthony Oliveira, great-grandson Antonio Anderson, brother David Pace, sister MaryLou Raples, brother Richard Pace (deceased) and his nieces and nephews.

Family and friends are respectfully invited to the visiting hours for Donald on Sunday, February 6, 2022 from 2-4 pm with a memorial service to follow at the C.C. Shepherd Funeral Home located at 134 Pleasant St. (Columbian Sq.) Weymouth, MA 02190. In lieu of flowers, donations may be given in Donald’s memory to the Parkinson’s Foundation at www.parkinson.org or to the charity of your choice.

To order memorial trees or send flowers to the family in memory of Donald Pace, please visit our flower store.