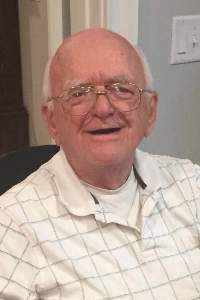 Lou was born in East Boston, on July 24, 1926, the first born of John and Anne (neé Maloney) Pumphrey, who were immigrants from Newfoundland. He was baptized at the original Sacred Heart Church, East Boston and attended school there until the family moved to Roxbury when he was 10. His father died in 1940, leaving Lou, his expecting mother, and his sister Alice. It was around this time that Lou, in order to help support his family, started to sell issues of multiple Boston newspapers. He had a route of more than a thousand papers, and had five paperboys working for him. He went to his first Red Sox game in 1938, back in the days of Lefty Grove, and Jimmie Foxx, and was a great fan for the rest of his life.

Lou served his country in the US Army Air Forces (the predecessor of the US Air Force) in the latter part of World War II, and for some time after. He was an aircraft mechanic, having been trained on the B-29 Superfortress, while also having worked on the B-25 Mitchell. After completing his service, he studied accounting at Burdett College, and worked for several companies in the ensuing years, including Waldorf Systems and Warren Brothers. In 1952, he began what would turn out to be 6 full decades in the Candlepin bowling business, when he purchased the Webster Alleys in Roxbury. He would later own the Webster Shore Lanes on Nantasket Beach, and the Country Club Lanes at the South Shore Country Club.

On June 6, 1953, Lou wedded Barbara Cushing at St. Patrick’s Church in Roxbury, with whom he has enjoyed nearly 69 years of marriage. They had their first 3 daughters while living in Roxbury, before moving to Weymouth in 1960, where they would have another daughter, as well as 5 sons. His progeny have always been a point of personal pride. Lou and his family enjoyed camping, and, in 1973, with a complement of 13, took a 6 week, 39 state, cross country trip, with their Pontiac station wagon pulling their 26’ Prowler trailer. It’s been the subject of stories to this very day. Lou and Barbara also enjoyed square dancing for a long time.

Lou became a grandfather (Poppy) in 1980, and the 27 grandchildren with whom he was blessed brought him great joy in the later years of his life. Several of his grandsons worked for him at the bowling alley, following in the footsteps of their aunts and uncles, and were blessed to get to know him in a privileged way. He loved being a grandfather.

Relatives and friends are respectfully invited to the visitation for Lou on Friday, February 4, 2022 from 10-11am in the Immaculate Conception Church, 720 Broad Street, Weymouth. A funeral mass will follow the visitation at 11:15am. A private burial will take place at Massachusetts National Cemetery. Lou was devoted to his Catholic faith, and would appreciate Masses, prayers, and works of charity for the repose of his soul. In lieu of flowers please donate to St. Jerome Church, Weymouth MA.

To order memorial trees or send flowers to the family in memory of Louis Pumphrey, please visit our flower store.