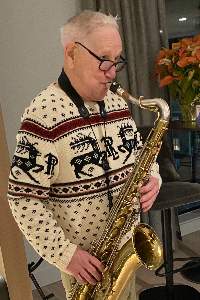 George R. Walling, age 85, of Weymouth passed away on December 31, 2021. George was raised and educated in Weymouth and graduated Weymouth High School in 1955. He married his beloved wife of 67 years, Nancy, in 1954 and they settled in Weymouth where they stayed and raised their family.

George was a Pop Warner football referee, worked as a printer, a teacher at the vocational school and worked many years at the Lottery. Prior to the Lottery, he worked at WHDH TV station. He was also an elected town official.

George was an extremely talented musician who played the saxophone and clarinet. He used his talents in many bands over the years but most recently enjoyed playing at the Weymouth Senior Center as a Whipple Snapper. George had a love for animals as well as gardening. He was so proud of the gardens he created at home.

Funeral arrangements for George will be private for his family.

To order memorial trees or send flowers to the family in memory of George Walling, please visit our flower store.