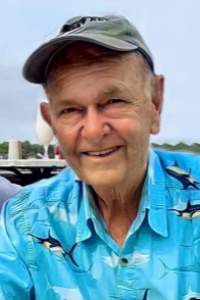 Robert H. Jackson, age 83, of Onset, MA passed away on Tuesday, January 4, 2022. Bob was raised and educated in Randolph and graduated Randolph High School. After school he immediately joined the Navy where he served his country for four years. Bob married his wife, Gerry, and they settled in Braintree where they raised their family and spent many wonderful years.

Bob was a pipefitter and a proud 30+ year member of local 537 where he guided many union members including his son. Bob retired from local 537 and enjoyed over 20 years of retirement while still staying involved supporting the union.

Bob was predeceased by his beloved wife, Geraldine Jackson (Ormston). He is survived by his children Darlene Griffin and her husband Kevin of Weymouth and Robert M. Jackson and his wife Amy of Weymouth, and his cherished grandchildren Courtney, Kelly, and Kevin.

Relatives and friends are respectfully invited to the visiting hours for Bob on Thursday, January 6, 2022 from 3-6pm in the C. C. Shepherd Funeral Home located at 134 Pleasant St. (Columbian Sq) Weymouth, MA. A funeral service will take place immediately following the visitation at 6pm in the funeral home. Cremation will follow with burial of Bob’s urn at the Bourne National Cemetery at a later date. Donations in memory of Bob may be made to the Ruth McLain Hospice House located at 670 Washington St. Braintree, MA 02184.


To order memorial trees or send flowers to the family in memory of Robert Jackson, please visit our flower store.