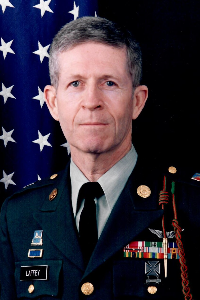 Paul L. Laffey, age 75, of S. Weymouth passed away on Tuesday, October 5, 2021. He was raised in Jamaica Plain until the age of 9 when he moved to S. Weymouth where he has lived since. Paul graduated BC High in 1964 and immediately started his lifelong military career. He also graduated Bentley College with a Bachelor’s Degree. Paul proudly dedicated six years to the Air Force followed by another 24 years in the Army eventually retiring at the rank of Command Sergeant Major in 2000.

Paul enjoyed Boston Sports and always considered himself blessed to have been able to take care of his parents in their later years.

Paul was the son of the late John and Grayce Laffey (Flynn). He is survived by his siblings Maryann Magoun and her husband Peter of New Hampshire and Jane Cartier and her husband Mark of W. Bridgewater, and his nephews Eric Cartier and Christopher Cartier.

Services for Paul will be private to honor his wishes. He will be buried with full military honors at Holyhood Cemetery in Chestnut Hill.

To order memorial trees or send flowers to the family in memory of Paul Laffey, please visit our flower store.