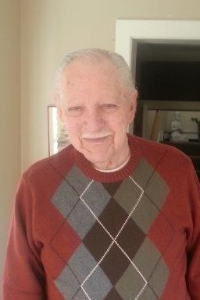 Paul Francis Dawson, age 92, of Weymouth passed away at home surrounded by his children on Thursday, September 2, 2021. Paul was born in Summerhill, Pennsylvania and lived there till the age of 10 when his family moved to Orlando, FL. He was a U.S. Navy veteran who proudly served his country during the Korean War.

Paul had a multitude of talents and many careers during his lifetime including captaining yachts and being a commercial lobsterman. His gift of gab made him a natural in sales, finding success with many companies ranging from Fuller Brush to being awarded salesman of the year at Knollwood Memorial Park in Canton.
Even the loss of his leg in an accident in 1981 did not slow him down. He went on the build a 26’ sailboat which he sailed to the Florida Keys and loved to race.

Paul was a positive, hardworking father who will always be remembered for his indefatigable spirit, kind heart and sense of humor. He was a great story teller and loved to recount his many adventures.

In lieu of flowers donations in his memory may be made to Guardian Angels For Soldier’s Pet at www.gafsp.org or any other veteran’s organization of your choice.

Funeral arrangements for Paul will be private for his family. At a later date the family will have a celebration of Paul’s life for those who knew and loved him.

To order memorial trees or send flowers to the family in memory of Paul Dawson, please visit our flower store.