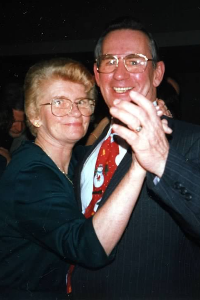 The couple lived in Hanson, MA until 2002 when they moved to Davenport, FL. James was a retired SeaBee Reservist, serving for over 27 years. He was known as a perfectionist among his peers in the carpentry business and retired from the Maintenance Department of the Brockton Hospital.

While the 6Bs were young, Joan was a stay at home Mom and eventually returned to the workforce and retired from K-mart.

Jim and Joan enjoyed traveling, camping and enjoying family time in many different states and countries. Upon retirement they traveled in their RV exploring the United States and eventually settled in Davenport, FL where they spent many hours at Disney, one of their favorite places.

According to their wishes, Jim and Joan will be buried together at a later date.

To order memorial trees or send flowers to the family in memory of James and Joan MacDonald, please visit our flower store.