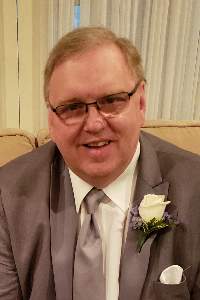 Donald P. Doroni Jr., age 59, of Hudson passed away suddenly on Monday, August 16, 2021. Don was born in Weymouth and raised in Hingham, Massachusetts where he graduated from Hingham High School in 1980. After attending classes at Bridgewater State College, he embarked on a nearly 40-year career as a manager in a variety of grocery and retail stores.

Don was married to Jean Monti from 1984 to 2007. They started a family in Braintree before settling in Bridgewater where they lived throughout their marriage. Don met his now fiancé, Susan, in 2011 and they made their home in Hudson.

Don enjoyed candlepin bowling throughout his entire life and competed in several New England Candlepin Bowling tournaments. He was an avid Red Sox and Patriots Fan and enjoyed engaging on-line with others who shared his love of bowling and sports. Above all else, he truly enjoyed spending time with his family especially his grandchildren. He will be remembered for his gregarious nature, infectious sense of humor and wit, and his gift for bringing fun and lightness to others.

Don is survived by his devoted partner of eleven years and fiancé Susan Andrusaitis of Hudson, his loving children Krystin Cotone of Bridgewater and Donald Doroni, III and his wife Tori of Brockton, Susan’s children Allison Callahan and her husband Dan of Wakefield, and John Clickner of Hudson, and his cherished grandchildren Apryl, Mychal, and Drew. Don is also the beloved brother of Steven Doroni and his wife Paula of Braintree and Debra Doroni and her husband James Aldrich of Rhode Island. He is the treasured uncle to Steven, Jillian, and Autumn Doroni of Braintree and Aija Aldrich of Rhode Island. He is the step-son of Ken Anderson of Weymouth. Don was preceded in death by his parents, Donald Doroni, Sr. and Lucia Anderson.

Relatives and friends are respectfully invited to the visiting hours for Donald on Thursday, August 19, 2021 from 4-8pm in the C. C. Shepherd Funeral Home located at 134 Pleasant St. (Columbian St.) Weymouth. Relatives and friends will gather in the funeral home on Friday morning at 10am for a Celebration of Life prior to the Funeral Mass which will begin promptly at 11am in the St. Francis Xavier Church in S. Weymouth.

To order memorial trees or send flowers to the family in memory of Donald Doroni Jr., please visit our flower store.