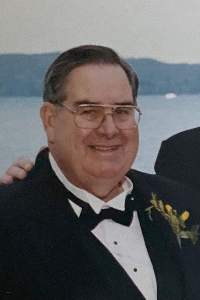 Robert Thoms, age 86, of S. Weymouth passed away at home on Thursday, May 13, 2021. Bob was raised and educated in Dorchester in St. Brendan’s Parish and graduated Dorchester High School for Boys in 1952. Bob served in the Army from 1957-59. Bob married his wife, Catherine, and they settled in Weymouth where they have lived since.

Bob worked with his family at Edward M. Thoms Paper Rule and Gilman Brothers for a short time prior to his career at E and F King Company in Norwood until his retirement in 1999. Bob volunteered with campfire girls and the Pond Plain Improvement Association for many years.

Bob was predeceased by his wife Catherine Thoms (Marsano), his parents Edward and Ursula (Phillips) Thoms, his son Robert Thoms Jr., and his brother Edward Thoms. He is survived by his children Mary Thoms Glazer of Weymouth and Douglas Thoms and his wife Kristen of Canada, his grandchildren Justin, MacKenzie, Robert III, Zachary, and Kimberly, and his great-grandchildren Catie, Arizona, and Weslyn. Bob is also survived by his brother Paul Thoms and his wife Val and his sister-in-law Diane Thoms.

Funeral arrangements for Bob are in the care of C. C. Shepherd Funeral Home located in Weymouth. In lieu of flowers donations may be made to the Pond Plain Improvement Association at 330 Pond St. Weymouth, MA 02190.

To order memorial trees or send flowers to the family in memory of Robert Thoms, please visit our flower store.