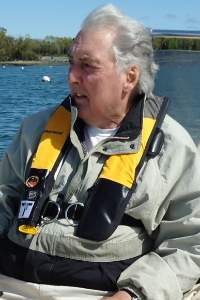 Francis “Frank” Golding of Hingham passed away peacefully surrounded by his family on February 5, 2021 at the age of 87. Frank was the son of William and Ruth Golding and was born raised and educated in Dorchester MA. After graduating English High School Frank went to Wentworth Institute of Technology and graduated with the class of 1954. Before being able to start his career, Frank was drafted and served in the United States Army. When his service concluded Frank found work at the Hingham Shipyard and learned marine drafting at the Sea School there. As a draftsman Frank worked at Bethlehem Steel in Connecticut and then at General Dynamics in Quincy until their closure in 1986. As a talented draftsman Frank worked with small firm on various projects to stay busy.

Frank was a man that enjoyed staying active during his life. He enjoyed sailing, boating and being out on the water. He was a member at various yacht clubs on the south shore. When Frank was not on his boat you could catch him shooing his daily 18 holes over at the South Shore Country Club. Frank even stayed active in the winter with ski trips both near and as far as Europe. Above all frank loved his family. He will be sorely missed by all that had the pleasure of knowing him.

Frank is survived by his cherished wife of 42 years Theresa Golding (Leger) of Hingham. He was also the loving father to John Golding of Hingham.

Services for Frank will be private.

Donations in Frank’s memory can be made to the Dementia Society of America by mail to PO Box 600, Doylestown, PA 18901, or online at www.Dementiasociety.org/donate.

To order memorial trees or send flowers to the family in memory of Francis Golding, please visit our flower store.