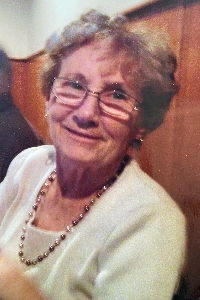 Barbara Archibald, age 86, passed away on January 27, 2021. Barbara grew up in Jamaica Plain alongside her twelve siblings. She married her husband Frank Archibald in 1958 and together they raised six children in Weymouth, MA.

Barbara was a devoted wife, mother, and grandmother. Well-known for her vibrant personality, Barbara was quick-witted, full of sass, and embodied a “get it done” attitude. She will especially be remembered for creating a home where the door was always open and if you happened to stop by, you were going to be well-fed whether you were hungry or not. Barbara was known as “Nana Choo-Choo” to her many grandchildren and great-grandchildren, all of whom she absolutely adored and to be loved by Nana was to be incredibly well-cared for. In her free time, she enjoyed painting, ceramics, and being at the beach. In her later years, she was the life of every family party, and we will miss eating, laughing, and dancing with her.

Barbara was the wife of the late Frank Archibald. She was predeceased by many of her beloved siblings as well as her grandson David T. Tamborella, Jr. She continues to be loved by her children: Nancy and her husband David Tamborella of Weymouth; Sandy Sullivan of Weymouth; Frank and his wife Leah Archibald of Pembroke; Daniel Archibald of Weymouth; Christine Goode of Weymouth; Maryjo and her husband Gregg Anderson of Sandwich. She will also be missed greatly by her grandchildren: Angela, Ricky, Danielle, Kyle, Kayla, Abby, Rachel, Dylan, Lauren, Tyler, and Hannah; as well as her great-grandchildren: Lena, Camden, and Olivia. Barbara is also survived by her sister Mary Hines of Abington, her brother George Perkins and his wife Betty of Rockland, and her sister-in-law, Jacqueline Billings of Weymouth.

Services for Barbara will be private. In lieu of flowers, donations may be made to the Alzheimer’s Association at www.ALZ.org.

To order memorial trees or send flowers to the family in memory of Barbara Archibald, please visit our flower store.