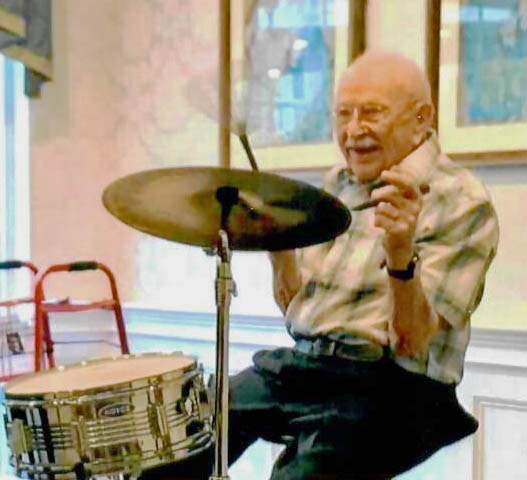 Harold Morse, age 97, of Duxbury passed away peacefully on January 22. Harold was a resident of Quincy and a very long time resident of Weymouth before recently moving to Duxbury in the fall.

Harold was born on October 31,1923 to Pauline (Martin) and Harold Edwin Morse. He was one of the first babies born at the South Shore Hospital, known then as the Weymouth Hospital. He often told stories of his days growing up in the Lovell’s Corner section of Weymouth pitching for the local baseball team at Brad Hawes Park.

After his own father passed away at a young age, Harold’s grandparents, Nellie and Leonard Tirrell, became an integral part of his growing up years. He went to Weymouth High School but left early to join the service in “WW2 the Big One” as he always called it. He was very proud to serve his country as a Corporal 2 Stripes in the US Army Air Corps. Upon returning he met Rose Lange of Quincy and together were married 51 years and raised 5 children.

Music was the core of Harold. His father was a well known musician (trombonist) in Weymouth. Although Harold was only 4 when his father died, he inherited that love of music. Harold began playing the drums at an early age and had his first professional “gig” before turning 16. He played in many establishments throughout Boston and the South Shore. And he never stopped! He was part of a music group up until last March, when COVID-19 prohibited him from playing in public. He was well known in Quincy at the Kennedy Center, Fore River Club House, Marina Bay, and well as at Grove Manor in Braintree. He brought joy to many through his music.

Harold was always known to be an “all or nothing” guy. He tells the story of skipping school to see the Glenn Miller band in the 1930s. That passion for the Miller band never waned. In fact, for his 96th birthday he was able to see his beloved band and receive acknowledgement from the band leader as being one of the most dedicated fans of the band, When the band dedicated the St. Louis Blues March to him, we were challenged to keep him in his seat. He BEAMED that day!

Harold was also a big fan of boxing, wrestling (or r-ah-sling as he said it), Billy Graham, JFK, the Honeymooners, Andy Griffith, and his beloved Red Sox. If you ever needed stats on the team, especially about the Splendid Splinter Ted Williams, Harold was your go-to-guy.

Harold’s proudest accomplishments and what he truly treasured most was his family. He had a long marriage to Rose and has left a huge legacy to carry on not only his passion of music and his love of the Red Sox, but the importance of family.

Harold is predeceased by his parents, his infant brother Donald, his wife of 51 years, Rose and his companion for many years, Connie Leonard. He is survived by and celebrated by his children Robert and his wife Laura of Largo FL, James and his wife Susan of Weymouth, Kenneth of Middleboro, Patti MacLennan and her husband Bill of Duxbury and Jeannie Desmond of Duxbury. His 14 grandchildren: Lori, Lisa, Shannon, Robyn, Randy, Jessica, Matthew, Will, Kerri, Patrick, Kristina, Brian, Avery, and Katie, and his 13 great-grandchildren Taylor, Haley, Cameron, Gabrielle, Jakob, Austin, Savannah, Aaron, Cadence, Katie, Brooke, Tyrus, and Lily. Harold is also survived by his great-great-grandchild Aiden.

Relatives and friends are respectfully invited to the visiting hours for Harold on Thursday, January 28, 2021 from 4-7pm in the C. C. Shepherd Funeral Home located at 134 Pleasant St. (Columbian Sq) Weymouth, MA. A private funeral service will take place at Old South Union Church, Weymouth which will be live streamed to the church’s facebook page. Burial will be at Mount Hope Cemetery, Weymouth. A special thank you to the staff at BayPath Nursing and Rehab Facility in Duxbury for the loving and tender care given to Harold. The family is very appreciative.

To order memorial trees or send flowers to the family in memory of Harold Morse, please visit our flower store.