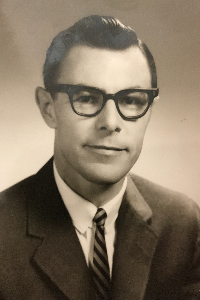 John W. Ortiz, age 96, of S. Weymouth passed away peacefully on Sunday, January 24, 2021. He was a proud son of immigrant parents from Spain and Ireland. John was raised and educated in his beloved Quincy graduating from Quincy High in 1942. He served in the Army Air Corps during WWII in N. Africa and Italy.

After John’s military service he continued working at South Shore National Bank, a career he started prior to his military service, while attending Northeastern University where he received his bachelor’s degree. John worked at that same bank for 47 years until his retirement in 1989.

John married his beloved wife of 69 years, Marie, in 1952 and they settled in Weymouth where they started a family and have lived since. John and Marie remained active parishioners of St. Francis Xavier Church throughout their lives and put great importance on raising their children in the Catholic faith.

In retirement John enjoyed golfing, travelling, and keeping in touch with extended family in Spain and Ireland. Above all else John enjoyed time spent with his family.

Relatives and friends are respectfully invited to the visitation for John on Tuesday, January 26, 2021 from 5-7pm in the C. C. Shepherd Funeral Home located at 134 Pleasant St. (Columbian Sq.) Weymouth. Friends will gather for the funeral mass Wednesday morning at 10am in St. Francis Xavier Parish located at 234 Pleasant Street, Weymouth. Interment will immediately follow at Fairmount Cemetery, Weymouth. Donations in lieu of flowers may be made to the Arnold Hall Conference Center in Pembroke at www.ArnoldHall.com.

To order memorial trees or send flowers to the family in memory of John Ortiz, please visit our flower store.