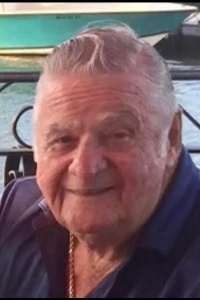 Mario H. Marmai Jr. age 87, of Weymouth, passed away on Sunday, December 27, 2020. Mario is the son of Mario Marmai and Frances (Bishop) of South Boston. After graduating from Dorchester High School, Mario enlisted in the US Navy where he served on the USS Anteitam, an Essex-class aircraft carrier based in Quonset Point, RI.

After discharge from the navy, he married Ann T. (Harrigan) Marmai in May of 1959. They started a family together in Dorchester then settled in Weymouth where they have lived ever since. In addition to his loving wife, Mario is survived by his son Paul of Lowell, Marilyn Davidson of CT, Karen Morgan and her partner Dave Fortier of Newburyport. Beloved son Michael passed away in April after a brief illness. Mario is also the cherished “grampa” of Lilly and Samantha Davidson and Jackson and Alec Morgan.

Mario was an active leader in the Weymouth Youth Hockey Program both as coach and league director and introduced hundreds of kids in Weymouth to the sport of hockey. But it was his selfless devotion to the community of special needs children that he’ll be most remembered for.

For nearly two decades he oversaw the Weymouth Elks special needs program arranging pizza parties, carnivals, annual Christmas celebrations and other activities. During this time, the program grew from serving about 100 youngsters to nearly 300. In 1990, the 2,000 members of the Elks lodge voted him Elk of the Year in recognition of his work in the community.

On many Saturday afternoons Mario and Michael could be found having lunch and catching a sporting event at the Elks lodge and being treated like royalty by the wonderful servers and members who will always maintain a special place in the hearts of the family for their kindness and goodwill to a very special father and his son.

Mario was an avid sports fan and relished the success of all four of Boston’s professional teams, especially the Boston Bruins for whom he had been a season ticket holder during the era of Bobby Orr and the Big Bad Bruins. For Mario and Paul, dinner in the North End and a B’s game at the “Garden” were cherished moments that spanned almost 40 years.

After retiring Mario and Ann spent their winters in Port Charlotte, FL where he worked on his golf game and his tan all the while bringing happiness and laughter to those at his home away from home.

Relatives and friends are respectfully invited to the Funeral Mass for Mario on Tuesday, January 19, 2021 at 10am in the St. Francis Xavier Church located at 234 Pleasant St. Weymouth. Burial will follow at the National Cemetery in Bourne, MA at 12:30pm. Donations in memory of Mario may be made to the Special Olympics at 512 Forest St. Marlborough, MA 01752.

To order memorial trees or send flowers to the family in memory of Mario Marmai, please visit our flower store.