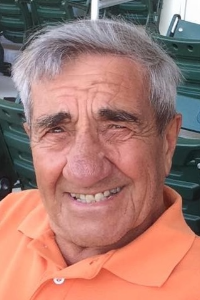 Anthony A. Quintiliani Sr., age 90, of South Weymouth passed away November 2, 2020. Born as Lindbergh “Lindy” and raised in Dorchester, he later legally changed his name to Anthony, after his father Antonio. He went to Wentworth Institute of Technology where he received a degree in Civil Engineering prior to serving in the US Coast Guard from 1951-54. While serving, he fell in love with his beloved wife Adele. They exchanged numerous love letters which she still cherishes to this day.

Anthony “Tony” and Adele married in 1956 and started a family in Dorchester. In early 1964 they relocated to Quincy where they continued to raise their growing family. Tony spent many years there working in his expansive rose and vegetable gardens. Tony worked for New England Telephone for 30 years and was blessed to have enjoyed 30 years of retirement with his wife and family. He and Adele spent many weekend nights enjoying their love of dancing. In 2005, they relocated to South Weymouth. In retirement, Tony enjoyed travelling annually with his wife to Naples, Florida and took several luxury cruises.

The entire Quintiliani family would like to thank the staff of the South Shore Hospital for their excellent and heartfelt care for Tony in his final days.
Anthony was the beloved husband of Adele (Bessette) Quintiliani of S. Weymouth, the loving father to Debbi Zeboski and her husband Steve of Holbrook, Denise Milford and her husband Wayne of Quincy, Tony Quintiliani Jr. and his wife Laurie of Nevada, and Adele Quintiliani of Weymouth, the grandfather of Matthew, Marc, Ashley, and the late Wayne, and his great-grandchildren Sadie and Peter.

Funeral services for Anthony are in the care of C. C. Shepherd Funeral Home located in Weymouth and will be private. Anthony will be interred in the Bourne National Cemetery. In lieu of flowers, donations may be made to St. Jude’s Children’s Hospital at www.StJude.org.

To order memorial trees or send flowers to the family in memory of Anthony Quintiliani, please visit our flower store.