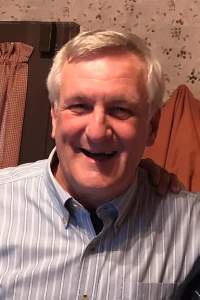 Frank W. Partsch III, age 66, passed away suddenly in Blacksburg, VA on Friday, June 5, 2020 as a result of a bicycle accident training for this years Pan Mass Challenge. Frank has biked the challenge religiously every year since his sister Anne passed away due to cancer. He was proudly wearing his first Pan Mass Jersey at the time of the accident.

Frank was raised and educated in Weymouth. He graduated Weymouth High School in 1971 before attending Suffolk University where he received a degree in Sociology. After Frank married his wife, Kathy, they moved to Warren, VT where they owned and operated the “Sugar Tree Inn” for ten years. Frank then worked for the Vermont Tax Department for many years before retiring in 2017.

Frank was an avid outdoorsmen who enjoyed Biking, Kayaking, Skiing, and hiking but truly loved spending time with his family. The many years he spent with Kathy were some of his greatest memories. Frank truly became a member of his wife’s family, being very close to her parents and her sister.

Son of the late Frank and Agnes (Bell) Partsch. Frank is the beloved husband of Katherine Bosco-Partch of VA, brother to Joseph Partsch (Ret Det. WPD) and his wife Christine of Weymouth, Katherine Moakley and her husband Tom of Weymouth, and the late Anne Mates. Frank is also the son-in-law to the late Geri and Dick Bosco, and brother-in-law to Joyce, Annette, Cheryl and many nieces, nephews and grand-nieces and nephews.

Relatives and friends are respectfully invited to the memorial visitation for Frank on Saturday, August 1, 2020 from Noon-2pm in the C. C. Shepherd Funeral Home located at 134 Pleasant St. (Columbian Sq.) S. Weymouth. A memorial service will take place in the funeral home immediately following the visitation at 2pm.

To order memorial trees or send flowers to the family in memory of Frank Partsch III, please visit our flower store.