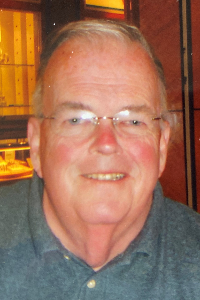 Richard W. Doyle, age 74, of S. Weymouth passed away on Monday, May 18, 2020. Dick, the only child of Maurice and Katherine, was born and raised in Dorchester. He grew up in and attended St. Mark’s parish where he found his bride, Mary, from the Curran family over on Wrentham Street closer to Peabody Square.

They married in 1967 and moved to Kingston. Over the next few years, they welcomed a couple of sons, Larry and Jimmy. In the late 70’s the family settled in S. Weymouth where they have welcomed family and friends for holidays and pool parties ever since.

Dick is survived by his beloved wife of 52 years Mary Doyle (Curran) and his loving son Jim Doyle and his fiancée Lisa King. His son, Larry predeceased Dick in 2018.

Along with his best bud, Jack McCarthy, Dick graduated in 1963 from Gate of Heaven High School in South Boston. He went on to earn his Bachelor’s Degree from Boston College while working full time.

He held several cool jobs including as an usher with his cousin Tom at the Regent Theatre in Arlington and as an intern for Jess Cain at WHDH radio. The majority of Dick’s career was in computers, implementing the first computer systems at the General Dynamics Shipyard in Quincy, installing and maintaining mainframes at DuPont and later selling PCs with his good friend, Carl.

Early on Dick realized that he not only married Mim but the entire Curran family gaining his favorite in-laws, Michael, Frank, Matty, Kathy & Richie. He found safety in numbers with the other ‘out-laws’, Anne, Jackie, Myriam, Brian & Diane. Uncle Dick always loved to hear updates on a couple generations worth of nieces and nephews.

Dick and Mary enjoyed many years of vacations, endless meals and getaways to LD’s place in Venice, Florida with friends Bob & Ruthann, Ann & Billy and Kay & Chuck as well as Jack & Jeanne and Tom & Claire. In his recent time at home, he was happiest on hamburger and hot dog night playing Wheel of Fortune and Jeopardy after a day of solving NCIS crimes from his chair.

The family would like to express gratitude to all the medical professionals on Emerson 6 at South Shore Hospital, South Shore VNA and Seasons Hospice Care for all the support and care they gave to Dick. Funeral arrangements for Dick are in the care of C. C. Shepherd Funeral Home in S. Weymouth and will be private due to the current viral crisis. Dick will be interred in Mount Hope Cemetery in S. Weymouth on Saturday, May 23, at 11:15am. In lieu of flowers, please donate to the “American Liver Foundation” in memory of Dick Doyle and send to: American Liver Foundation, 188 Needham Street, Newton, MA 02464.

Extended family and friends are welcome to the graveside service. Unfortunately, the family cannot host a celebratory gathering after the services, however they will remember Dick at a later time. Please visit www.CCShepherd.com to leave a message for the family.

To order memorial trees or send flowers to the family in memory of Richard Doyle, please visit our flower store.