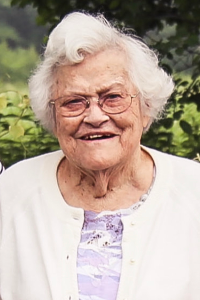 Elizabeth (Betty) Cugini, lifelong resident of Weymouth, was called home on April 27th after complications from Covid-19. She joyfully joins her husband Joseph (Joe) and daughter Joyce (Cugini) McGhee in heavenly peace. She was 91 years loved.

Her heart is kept alive through her daughter Lynn Baird and her husband Don of Ashby, Daryl Cugini and his wife Janice of Weymouth, Donald Cugini and his fiancé Maria Berman of Sandwich, Glenn Cugini and his wife Kathy of Marshfield, her son-in-law Edward McGhee of Boston, sister Dorothy Hodgson of Maine and sister Ina Cobb of Wareham. She was adored by her grandchildren; Amanda Chatsko, Sara McGhee, Andrew Bulva, Michelle Cugini, Ashlee Rockwood, Danielle Davis, Nick Cugini, Joey Cugini, Danny Cugini and Megan Zachem, and admired by her great grandchildren; Collan and Kyle Bulva, Noah Cugini (and baby Rockwood on the way).

Betty could be found at Community Baptist Church every Sunday, where she was an active charter member, singing and spending time with friends; especially Myrle. She was a dog lover, there was no Boston Terrier she didn’t adore. Betty was patient and loving, two attributes that showed themselves in her knitting and her ceramic painting. She loved spending summers near the water; first at Fearings Pond in Plymouth and then at Peter’s Pond in Sandwich.

Among all the careers and positions that she had in life from being a preschool teacher at First Baptist Church to a Rainbow Leader in Weymouth, being a wife, mom and a grandmother were her favorite. Of all things Betty loved most, her family was at the top of the list. She would melt their hearts and keep their hands warm with an abundance of mittens that she knit. She was never happier than when she was with her children and grandchildren. Her favorite visitors were those with sticky hands or furry paws.

Betty spent the last two years living as a favored resident at Queen Anne’s Nursing Home in Hingham, where she could be found playing Bingo, waiting for Bingo to start, or spending her winnings from Bingo. She cherished her Tuesdays with Lynn as long as she was back in time to catch a concert. She also grew a strong friendship with Nancy who quickly became her confidant.

Funeral arrangements for Betty are in the care of C. C. Shepherd Funeral Home in Weymouth and will be private due to the current viral crisis. A celebration of Betty’s well-lived life will be held at a later date. In lieu of flowers, donations can be made to ASPCA, one of her favorite charities.

To order memorial trees or send flowers to the family in memory of Elizabeth Cugini, please visit our flower store.