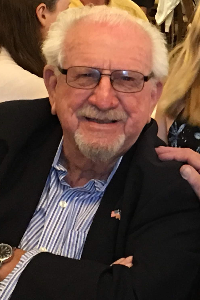 Charles M. Madden of South Weymouth, died April 14, 2020 at the age of 89 after a short battle with cancer. Charlie grew up in Dorchester, St Ann’s Parish, graduating from Boston English High School. He proudly served in the U.S. Army during the Korean and Vietnam wars. His tours of duty included Germany, Korea, and various other duty stations in the United States. It was during his tour of duty in New Mexico where he met his future wife, Nellie of the Navajo Nation. His military awards include the National Defense Service Medal with Oak Leaf Cluster, the Army of Occupation Medal, Expert Rifleman Badge, five Good Conduct Medals and the First Class Missileman Badge. He retired from the Army in 1969 at the rank of 1SG (First Sergeant).

Charlie had a technology career spanning over sixty years working on missile systems for the U.S. Army and with the early computer giants, Data General, Honeywell, and EMC Corporation. In 1987, he founded CHARAL Group, a global electronics and computer sourcing company based in South Weymouth, Ma.

He enjoyed spending cherished time with family on Cape Cod and will be remembered as a gentleman who was always quick with a story.

A private service will be held at the Massachusetts National Cemetery in Bourne, MA at a later date where Charlie will be forever reunited with Nellie. Donations in memory of Charlie may be made to the Norwell Visiting Nurses Association and Hospice Charitable Fund - Pat Roche Hospice Home.

To order memorial trees or send flowers to the family in memory of Charles Madden, please visit our flower store.