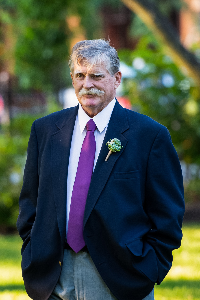 Kenneth Edward "Ken" Carey of Abington, Massachusetts, passed away peacefully after a long illness on November 27, 2019, at the age of 69.

He graduated from the University of Maryland in preparation for his career as a professional Mechanical Engineer. He worked primarily in the nuclear industry and became the national fire protection specialist for Stone and Webster Engineering. Ken was recognized by his peers as a consummate professional, someone that anyone could turn to for mentorship and direction.

Ken lived in many places, but he always found himself back in the place he belonged: Massachusetts. This is where he met the love of his life, Paula Nicolai. Paula and Ken were married for 36 years and helped each other to be the best versions of themselves. Together they traveled extensively and bought and rehabbed multiple properties throughout New England.

Ken is remembered as an intelligent and humble gentleman who lived his life with integrity. He was passionate about politics and analyzing current events. He enjoyed spending time in Maine hunting and boating. Ken loved his many labs - Hustler, Shadow, Truffles, and Eva, and was especially fond of his cat Smokey.

Ken was preceded in death by his mother Rita, his father William, his brother, William, and his nephew and Godchild Thomas. He also leaves behind his loving wife of 36 years, Paula Nicolai-Carey, and his grandchildren, Drew and Amber Hall, and his grandson-in-law, Sam Ellison. Ken is also survived by his brothers Robert, Paul, and sister Mary Jo-Anne Carey of Virginia, his brothers Johnny of Naples Italy and Andrew of the State of Washington, his extended family of Esther, Rick, and Abigail Fraser of Abington and many beloved nephews and nieces.

A memorial Mass will be celebrated on Saturday, January 25, 2020, at 11:30 AM, at St. Joseph’s Church, 68 William Cardinal O’Connell Way, Boston, MA 02115. Visitation with family and friends will take place following the Mass at his home in Abington from 2:30 to 8. Please join us in celebration of a life well-lived.

His family wishes to extend their gratitude to the many doctors and nurses at Beth Israel Deaconess Medical Center, who provided Ken with exceptional and compassionate care over the past fourteen years.

A Red Cross Blood Drive will be held in his memory on January 16, 2020, from 2 to 7 at Weymouth High School Gold Cafeteria. To sign up contact; WWW.REDCROSSBLOOD.ORG and enter sponsor keyword: KENNETHC

To order memorial trees or send flowers to the family in memory of Kenneth Carey, please visit our flower store.