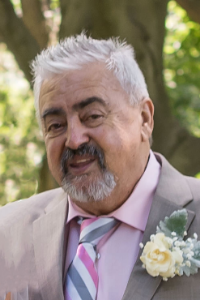 Ricardo Mermet, age 72, passed away on August 10, 2019, surrounded by his loving family. Born and raised in Buenos Aires, Argentina, Ricardo came to Boston as a young man, where he met his beloved wife, Nancy, whom he married in 1976. Ricardo and Nancy settled in Weymouth where they started a family and have lived ever since.

With a tireless work ethic and entrepreneurial spirit, Ricardo embodied the American Dream. He began his career in the hospitality business as a dishwasher, then waiter, at some of Boston's most prestigious restaurants. Eventually realizing his dream, Ricardo opened restaurants and businesses of his own, including Tango, in Arlington, in 2002, which is still owned and operated by the family. He beamed with pride as the restaurant hosted the Argentina National Soccer team and their legendary captain, Lionel Messi, for a meal on Father's Day in 2016.

A diabetic much of his life, Ricardo was in dire need of a kidney transplant in 2008. As hope was fading, a generous stranger named Karl Chapin contacted the family through MatchingDonors.com and became a living donor. Thanks to Karl's selfless act, Ricardo saw the birth of his second grandson, walked his youngest daughter down the aisle, and enjoyed a well deserved retirement with Nancy.

Generous and kind, Ricardo greeted friends and strangers alike with a warm smile and open heart. He loved watching futbol, traveling with family, sharing a good bottle of Argentinian Malbec, and doting on his grandsons.

Ricardo is survived by his beloved wife of 43 years, Nancy Mermet (Ford) of Weymouth, his loving children Andrea Hule of Weymouth and her former husband Prakash 'Gotu' Hule, and Alissa Sherman and her husband Eric of Stoughton. Ricardo was cherished and devoted Abuelo to Andrew and Nicholas, loving Tio to his four nephews, and brother in-law to Raul Fernandez and Jane Ford. He was predeceased by his sister Lilia Mermet and brother in-law Lewis Ford..

Relatives and friends are respectfully invited to the visitation for Ricardo on Saturday, August 17, 2019 from 10-11am at Holy Nativity Church located at 8 Nevin Rd., S. Weymouth, MA 02190. A Funeral Service will immediately follow in the church at 11am. In lieu of flowers, donations may be made to MatchingDonors.com at 766 Turnpike St., Canton, MA 02021 or Holy Nativity Church located at the address above.
To order memorial trees or send flowers to the family in memory of Ricardo Mermet, please visit our flower store.