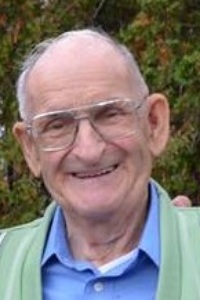 Daniel R. Mackay, age 89, of Weymouth passed away feeling the love of his family on June 13, 2019. Born in Wheeling, WV, Dan was raised in Buffalo, NY. He joined the Marines and served during the Korean Conflict, where he was part of the initial landing at the Battle of Inchon.

Dan met his beloved bride of 52 years, Agatha, at Quantico, VA. and were married three months later. Dan and Ag settled in Weymouth in 1958 where they raised a family and have resided since. Dan worked for the Quincy Shipyard until it closed and then many years as a custodian at Weymouth North High. He worked hard for his family and had a deep love and respect for our country.

Daniel was predeceased by his wife, Agatha Mackay (Hynes), who was the love of his life. He is the loving father of Greg Mackay and his wife Donna of NH, Suzanne Sarhanis and her husband Alex of S. Weymouth, and Phil Mackay of W. Yarmouth. He was the cherished Grandpa of James, Richard, Lee, Greg, and Bob, and was the great-grandfather of eight. Daniel also leaves behind his best friend and brother Jim MacKay, his dear sister Dorothy Scotland and Paul Mackay. He also leaves his close friend Barbara Adams.

Relatives and friends are respectfully invited to the visiting hours for Dan on Monday June 17, 2019 from 4-8pm in the C. C. Shepherd Funeral Home located at 134 Pleasant St. (Columbian Sq.) Weymouth, MA. Friends will gather in the funeral home Tuesday morning at 9:45am for a funeral service that will begin promptly at 10am. Burial will follow at Blue Hill Cemetery, Braintree.

To order memorial trees or send flowers to the family in memory of Daniel Mackay, please visit our flower store.