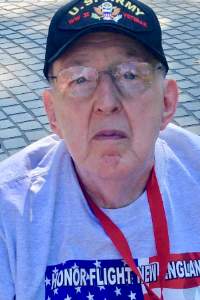 Kenneth C. Littlefield, 93, of Weymouth, MA passed away peacefully on February 28, 2019. Kenneth was a 61 year member of Weymouth United Masonic Lodge. He was a World War II Veteran and went to Washington D.C. with his grandson, Chris, through Honor Flight New England to see the World War II monument a few years ago. Ken was the true definition of a family-man, helped every one, and was always the one there for his neighbors and friends, grocery shopping, running errands or bringing them to doctor’s appointments. He was a member of the First Church in Weymouth for over 50 years. Kenneth worked many years for Annelex in Boston and retired from Armstrong World Industries in Braintree. He was born and raised in Dexter, Maine and moved to Boston after he got out of the service.

Kenneth was the loving husband of Ann Marie (Brannen) Littlefield for 65 years, father of Brenda (Littlefield) O’Toole and her late husband, Michael and K. Allen Littlefield and his wife, Kathy. He is the proud grandfather of Christopher M. O’Toole and his wife, Jessica, Kendra M. O’Toole, David R. O’Toole & Daniel Littlefield and his wife, Caitlin. He is the great-grandfather of Cara-Lynn and Michael O’Toole. He is also survived by his sister, Pauline Hatfield of Fresno, CA and brother, Douglas Martin, of Easton, MA, and pre-deceased by his brother, Frederick Littlefield. He is also survived by several nieces, nephews and cousins. Donations in his memory can be made to the Memorial Fund at First Church in Weymouth, 17 Church Street, Weymouth, MA 02189.

Relatives and friends are respectfully invited to the visiting hours for Kenneth on Monday, March 4, 2019 from 4-8pm in the C. C. Shepherd Funeral Home located at 134 Pleasant St. (Columbian Sq) Weymouth, MA. A Masonic Wake Service will take place at about 7pm. Friends will gather at First Church in Weymouth located at 17 Church St. Weymouth, MA for a funeral service that will begin promptly at 12pm on Tuesday morning. Burial will follow at Mount Hope Cemetery, Weymouth.

To order memorial trees or send flowers to the family in memory of Kenneth Littlefield, please visit our flower store.