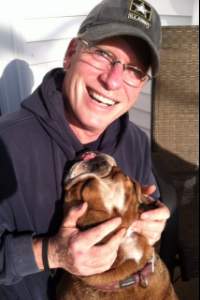 Michael E. “Mel” Lanahan, age 62, of N. Weymouth passed away at home with family and close friends by his side on January 14, 2019 after a long battle with brain cancer. Mike was born and raised in Weymouth. Immediately after high school he joined the Navy and served for four years on the USS John King then two additional years in the Coast Guard.

Mike married his wife, Susan, in 1986 and they settled in Cape Cod where they started a family. He worked at Massachusetts Maritime Academy for many years and also worked at the Sandwich Power Plant. Later Mike moved back to N. Weymouth on the water where he grew up. He was active at St. Jerome Parish in N. Weymouth, enjoyed fishing and being with close friends and family. Mike will be missed for many qualities but will always be remembered for his infectious laugh that always lit up a room.

Relatives and friends are respectfully invited to the Funeral Mass in honor of Mike’s life which will be held on Friday January 25, 2019 at 10:30AM in St. Jerome’s Church located at 632 Bridge St. N. Weymouth. Burial will be at a later date in Old North Cemetery, Weymouth.

To order memorial trees or send flowers to the family in memory of Michael Lanahan, please visit our flower store.