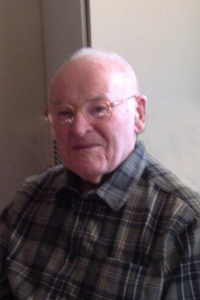 Francis A. Douglas Sr., age 97, of Braintree and formerly of Norwell passed away at home on December 25, 2018 with family by his side. Frank was born and raised in Somerville, attended Boston College High School and Boston College then served in the Marines during WWII. When he returned in 1945 Frank married his beloved wife of 73 years, Evelyn. They settled in Braintree where they raised a family then in 1977 moved to Norwell where Frank and Evelyn spent most of their life together. Frank was in the insurance industry and owned King & Company Insurance Agency in Charlestown for many years.

Frank is survived by his beloved wife Evelyn Douglas (Asmus) of Braintree, his loving children Elaine Grandoit of Arlington, Winnie Douglas of Andover, and Frank Douglas and his wife Jeanne of Plymouth. Frank is also survived by several grandchildren and great-grandchildren.

Frank’s burial service was private for his family at his request and took place in the Church Hill Cemetery in Norwell. Relatives and friends are respectfully invited to the Memorial Mass in honor of Frank’s life which will take place Saturday January 12, 2019 at 10am in the St. Francis Xavier Church located at 234 Pleasant St. S. Weymouth, MA.

To order memorial trees or send flowers to the family in memory of Francis Douglas Sr., please visit our flower store.