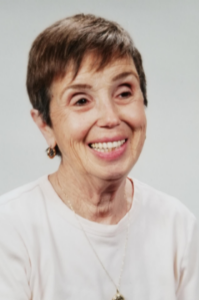 Patricia Mary Kandel, age 88, of South Weymouth, MA died suddenly on Friday, December 14, 2018 at her home of a heart attack while being treated for stage 4, melanoma cancer. Her son was by her side when she died.

Patricia Mary was born May 8th, 1930 and was the daughter of Jacob and Edith Mary (Cowley) Kandel. She is predeceased by her brothers Laurence and Robert Kandel. Pat was born in Brooklyn and grew up in Laurelton, Queens, NYC. She raised her children in Hauppauge, Farmingdale and North Massapequa, NY and Great Barrington, MA; she doted on her grandchildren in Boston, MA; Fort Collins, CO and Brookline and South Weymouth. Patricia was the former wife of John L. Rutkowski of Lords Valley, PA and Murray Lefsky of Freeport, NY, both deceased.

Pat’s single minded passion and life’s work were her children, their spouses and their children. She is survived by her her daughter and son-in-law Mary Rutkowski and Gideon Ansell, Brookline and sons and daughter-in-laws: Christopher and Irma Rutkowski, NJ; Michael Lefsky and Stephanie Kampf, CO; Matthew and Eileen Lefsky, South Weymouth as well as Justine Staelin and Mark Bodig, CO. She also was instrumental in helping to raise her second husband’s children: Brian, Karen, and the late, Barbara Lefsky, for a time. Pat was predeceased by her adored son John B. Rutkowski of AIDS/HIV in 1988. She is also survived by her sister-in-law Leonora (Lee) Kandel Wolfe, CO. Pat was also a loving aunt to many nieces and nephews and cousin to many adored and fun-loving generations.

Patricia was a proud graduate of PS 156, Far Rockaway High School and The Scudder School for Secretarial and Executive Training, NYC. She dreamed of completing her college degree well into later life. Upon graduating from high school, Pat worked as personal shopper at Macy’s Herald Square and in the meatpacking district for a wholesale distributor when the High Line was still in use. Upon completing her studies at Scudder, Pat left NYC for Washington, DC during the Korean War, where she worked for the US Navy Department as an administrative assistant. Hers was one of the few quonset huts on the Washington Mall that had air conditioning during the steamy summers there. Pat lived happily in Adams Morgan with a lively group of fellow secretarial school graduate roommates; these gorgeous young women, Pat especially so, worked hard and played even harder, dancing many nights away with a steady stream of dates, only to return to work a few hours later. Pat returned to NYC, where she worked for both Ted Bates and Compton Advertising on the Procter & Gamble account. She was a true “Mad Ave” secretary with stories that were better than the television show. After marrying, Pat continued to work full time until taking a number of years away from paid employment to focus on raising her family. After each of her two divorces, Pat returned to the typewriter, where her cracker jack skills at spelling, writing and organizing excelled. Pat worked retail at Macy’s to make extra holiday money and at a variety of small companies and shops scattered throughout NJ, MA and NY and for Douglas Trumbull Productions in the Berkshires, her own brush with Hollywood. Later in life, before becoming a doting grandma to her increasing brood of grandchildren became her full time avocation and vocation, Pat also worked as a personal assistant in NYC and as a nanny for a number of Beacon Hill families. During this time, Pat often wrote hilarious poems about being a single mom juggling work, raising the last two of her five children and dealing with overbearing bosses. Pat enjoyed volunteering for a variety of causes over the years, and as reigning queen and longest resident of her apartment building in South Weymouth, collected and ensured that the staff there and mailman received their end-of-year gratuities and appreciations.


Pat’s truest loves were her eight grandchildren, spanning many decades, whom she cherished beyond words: Adeline and her wife Ashley, Hannah Cypress and her fiance Zach, Ayla, Jacob, Ivan, Ainsley, Ronan and her treasured youngest, Clara. Pat also deeply embraced her bonus grands Ashley B. and Anji and Praveen and Leya as well as the countless young people she met through her children and grandchildren. She had the gift of making each grandchild feel like they were her absolute favorite, and they were! Everyone loved Grandma Pat Pete or GPP, the affectionate moniker given to her by her grands. She knew how to support these young people calmly and with faith that their paths, while not always perfect, were their own journey to follow and embrace. She left a legacy of love, affection, kindness, caring and the belief that each of her grandchildren had the right to make their own mistakes as well as to soar as they enjoyed their very own small and large achievements. She was immensely proud of and deeply loved by each and everyone one her granddaughters and grandsons. Pat seemed to know intimately what each of her grandchildren were interested at any given age, and to know the perfect thing to say or gift to send them. Pat’s acceptance of who her grandchildren are now, and who they dreamed of becoming, would be something she’d want them to hold in their hearts forever as a gift of love from her.

Pat made traveling and adventure for the sake family and friendship into an art form. She was willing to hop on in her car or get onto a bus, train, and later in life, even planes (when she finally conquered her fear of flight with a first-ever trip to Paris at age seventy) to see her children, grands, in-laws, cousins and friends scattered across the country. Pat loved her friends and had so many dear ones: the Scudder gals; Farmingdale and Viceroy mom friends; fellow NYC xenophobes, Berkshire buddies; Colorado companions; and her children’s friends that she watched proudly turn from young ones and teens into proud parents and grandparents themselves. Finally, in the last weeks of her life, her dearest friends from the Fulton Street School Apartments, especially Sandi and Suzanne, brought her much help, laughter and comfort. To Pat, friends were family and family were friends and she lived that motto to the fullest.

In addition to her family and friends, Pat’s passions were beach days in Wildwood, NJ, Jones Beach, NY, Cape Cod and Nantasket with family and friends; travel to just about anywhere; discussing beautiful cars and homes, Frank Sinatra and Tony Bennett; art house movies; a good looking man in an even better looking suit; the Yankees (much to her New England grandchildren’s chagrin); dressing with taste for all occasions; classical music on the radio or in live performance; driving fast but oh, so safely; family gathering of all kinds; Friendly’s ice cream sundaes and Wendy’s lunch dates with grandchildren; a good meal out at a nice restaurant; keeping a lovely home; running a proper laundry load, removing stains and ironing; baking her famous brownies for those she loved; laughter and the joyful sounds of children playing.

Pat was a deeply spiritual, faith-filled woman who chose reading the Sunday NY Times with a hot cup of coffee over services at a church or synagogue. Pat always tried to help others from all walks of life; to make everyone feel included because she had experienced exclusion; to reach out to the lonely because she had known loneliness and how to treasure time and visits with those she loved and cherished and who loved and cherished her back. Despite many ups and downs during her many years, Pat’s love of life, silliness, joy and laughter were here gift to all who were in her orbit. Patricia took a genuine interest in every single person she met, was a uniquely positive spirit and will be truly missed by everyone who knew her.

Patricia’s family welcome all who knew her to join them on Sunday, December 30, 2018 at C.C. Shepherd Funeral Home (Columbian Square), 134 Pleasant Street, S. Weymouth, MA for visitation 11am -12 pm followed immediately by a Celebration of Life at Noon in the funeral home.

In lieu of flowers, and because she loved animals so much, especially her own, her children and grandchildren’s pets, Patricia Kandel asked that donations be made, in her name, to Boston’s MSPCA, https://www.mspca.org. She’d want us to remember to put water in their bowls often!

To order memorial trees or send flowers to the family in memory of Patricia Kandel, please visit our flower store.