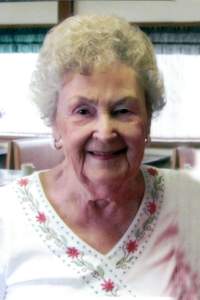 Marilyn R. M. Dunaiski, age 94, of Hingham passed away December 12, 2018. Marilyn was born August 6, 1924 in Duluth, Minnesota and grew up in Proctor, Minnesota. The daughter of Frank and Ruth Miller, she was quite active at Proctor High School and excelled in music, particularly the marimba. Marilyn’s father passed while she was in high school, so her post-graduation plans changed from attending college to assuming a secretarial position in Minneapolis. In 1946 she married her high school sweetheart, Raymond Dunaiski, also of Proctor. The couple moved to Schenectady, New York, where they accepted jobs at General Electric, Ray working as an engineer, and Marilyn as a secretary.

Marilyn and Ray built their first home together in Scotia, New York, with the help of several wonderful friends. There they raised their children, Paul of Proctor, Minnesota; Mark, deceased in 2009; and Barbara McNamara of Norwood, Massachusetts. Marilyn and Ray were fortunate to remain in New York for many years, eventually being transferred to Coshocton, Ohio; Detroit, Michigan; overseas in Bahrain; and Cincinnati, Ohio. Retiring from General Electric, Ray then worked for Siemens-Allis and they moved to Sarasota, Florida. Upon final retirement, they moved back to Duluth, Minnesota, where Ray passed in 2001. In her later years, Marilyn eventually settled in Hingham, Massachusetts.

Ray, kids, family and friends were always priorities for Marilyn. She was a big supporter of Ray’s career, often entertaining friends, business clients and staff from GE, and as President of the Palm Aire Golf Club in Sarasota. Together they enjoyed traveling, Duke basketball, bridge club, hosting a party, high school and family reunions in Minnesota, researching the family tree and volunteering at their church. Marilyn was quite the homemaker for her family. She loved baking and cooking, sewing, crossword puzzles, and flower arranging. Marilyn had a flare for decorating and playing the organ for anyone who would listen. She had a particular fondness for weekly hair appointments, sending and receiving greeting cards, small glass jars and boxes, moving furniture and noticing lint and crumbs on the floor. She was an officer in the Rosary Alter Society at the Immaculate Conception Church in East Glenville, New York, a volunteer in the gift shop at the Sarasota Memorial Hospital and an ecumenical minister in Sarasota.

Marilyn is survived by Paul and Linda Dunaiski of Proctor, Minnesota, and Barbara and Michael McNamara of Norwood, MA. She lovingly leaves 5 grandchildren, and 3 great-grandchildren. She is predeceased by husband, Raymond M. Dunaiski; son, Mark T. Dunaiski, and grandson Adam Dunaiski.

The family would like to thank the Norwell Visiting Nurses Association and the wonderful staff at Linden Ponds in Hingham. Funeral services for Marilyn will be private for her family and are in the care of C. C. Shepherd Funeral Home located in Weymouth, MA. If you would like to leave a message for the family please visit www.CCShepherd.com.

To order memorial trees or send flowers to the family in memory of Marilyn Dunaiski (Miller), please visit our flower store.