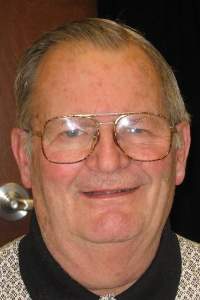 Robert N. LaVigne, age 86, of Hingham and formerly of Dorchester and Worcester, passed away on Monday, October 15, 2018. Born February 16,1932 in Worcester, MA, Bob was the son of the late Robert G. and Mildred (Benoit) LaVigne. He was raised and educated in Worcester and graduated from the College of the Holy Cross (55’). Bob spent his early years after graduation as a High School French teacher at a Jesuit High School in Louisiana. Moving back to the Boston area he joined the State of MA as a Social Worker in the State Dept of Rehabilitation. He loved his work and was successful at it. He retired after 30 years well respected by both his clients and co-workers. His real love though was his beloved wife of 43 years, Rita (Neville) LaVigne. They met on a cruise in 1972 and it was true love. They soon got married and settled in Dorchester for many years where Bob and Rita were very active at St. Gregory’s Parish. Most recently they moved to Linden Ponds in Hingham where they have resided since 2007. Bob and Rita loved traveling and enjoyed trips together to many places including Puerto Rico, Jamaica and Ireland. Anyone who had the pleasure of meeting Bob would remember him as a man who loved being with and socializing with people. Bob and Rita had many friends and will be greatly missed.

Bob was predeceased by his beloved wife, Rita (2017), his parents and brother Kirk Lavigne (2017) and his brother-in-law Tom Neville (2011). He is survived by his brother Tom Lavigne of Jupiter, FL/Hyannis, MA, his sister in law Mary Neville Hood and her husband Peter of VT, his brother in law, Tim Neville and his wife Susan of CT, and his sister in law, Isabelle Bedard of NY. Bob is also survived by many nieces and nephews.

Relatives and friends are respectfully invited to the visitation for Bob on Saturday, October 27, 2018 from 8:30-9:30am in the C. C. Shepherd Funeral Home located at 134 Pleasant St. (Columbian Sq.) South Weymouth, MA. A Funeral Mass in honor of Bob’s life will take place at St. Albert the Great Church in Weymouth following the visitation at 10AM. Burial will immediately follow in Fairmount Cemetery, Weymouth. In lieu of flowers, donations may be made to the St. Albert the Great Catholic Church 1130 Washington St. Weymouth, MA.

To order memorial trees or send flowers to the family in memory of Robert LaVigne, please visit our flower store.