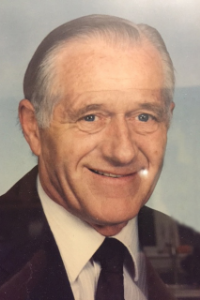 Robert O’Bryan, age 87, of Rockland passed away on October 18, 2018. Robert was born and raised in Dorchester. After high school he was married to his beloved wife of 63 years and then joined the Navy where he was stationed in California and served for six years on the USS Tidewater and the USS Everglades. When Robert returned home they settled in North Weymouth where they started a family. After several years they moved to Rockland where they resided for almost 60 years. Robert was a jack-of-all-trades and never encountered anything he couldn’t fix. Although he had many jobs over the years providing for his family, he most enjoyed being the Maintenance Director at the Boston School for the Deaf in Randolph for 15 years. Robert was a dedicated Mason and was a Past Master and served for over 20 years as the Secretary for the Wessagusset Lodge. He enjoyed all Boston Sports especially the Red Sox and also loved attending his grandkid’s sports games and activities.

Robert was predeceased by his beloved wife Eleanor O’Bryan (McKenzie). He is survived by his loving children Karen Morrison and her husband Kemble of Auburn, NH, Rob O’Bryan and his wife Judith of Abington, Rick O’Bryan and his wife Cheri of Rockland, and Dianne Botelho and her husband Steve of Holbrook. Robert is also survived by ten loving grandchildren, six loving great-grandchildren, and his sister Barbara Brower of NC along with many nieces and nephews.

Relatives and friends are respectfully invited to the visiting hours for Robert on Monday October 22, 2018 from 4-8pm in the C. C. Shepherd Funeral Home located at 134 Pleasant St. (Columbian Sq.) Weymouth, MA 02190. Relatives and friends will gather in the funeral home on Tuesday morning for a funeral service at 11am. Interment will immediately follow the service at Fairmount Cemetery, Weymouth. Donations in memory of Robert may be made to Ascend Hospice, 100 Locke Drive, Marlborough, Ma 01752. For directions or online condolences please visit www.CCShepherd.com or call 781-337-0050.

To order memorial trees or send flowers to the family in memory of Robert O'Bryan, please visit our flower store.