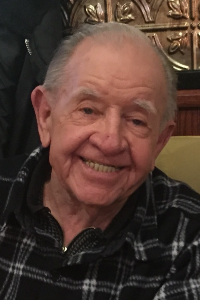 John J. “Jack” Egan Sr., age 89, a lifelong resident of Weymouth, passed away at his home surrounded by his loving family on Sunday, September 9, 2018.
Jack was a senior structural designer in the shipbuilding industry for many years where he, worked for both Bethlehem Steel and General Dynamics at the Fore River Shipyard in Quincy. After the Shipyard closed in 1986 he worked for Marine Systems in South Boston before retiring.
In the closing days of World War II, he joined the Marines and then joined the Army during the Korean War.
John was a huge sports fan holding seasons tickets for the Patriots for several years and loved the Red Sox.
Jack was the devoted father of John J. Egan Jr. and his wife Diane, Joseph Egan. and Maureen Egan all of Weymouth, the late David Egan and the late Paul Egan He was the father-in-law of Debra Egan of Weymouth. He was the beloved grandfather of Melissa Pelletier and her husband Jonathan of Kingston, Tara Egan and her wife, Shauna of Weymouth, Katie Egan of Weymouth, Shaun Donovan of Weymouth, Ashley Egan of Hingham, Kelsey Kilrain of Weymouth and the late Jonathan Egan. Jack also leaves his former wife Marion Egan of Dorchester. Jack was the son of the late William B. and Mary (Madden) Egan, he is also predeceased by his brothers, George Egan, Willian Egan and James Egan, and his late sisters Mary Keniston, Doris Egan and Helen Fettig.
Relatives and friends are respectfully invited to visiting hours for Jack on Thursday, September 13 from 4-8 PM in the C. C. Shepherd Funeral Home located at 134 Pleasant St. (Columbian Sq.) S. Weymouth. Relatives and friends will gather at the Funeral Home for a funeral service in honor of Jack on Friday, September 14 at 10 AM.

To order memorial trees or send flowers to the family in memory of John J. Egan Sr., please visit our flower store.