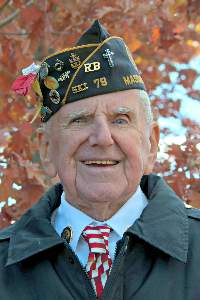 Sherman L. Smith, age 91, of Weymouth, passed away on Monday, September 3, 2018.
Sherman served his country in the Navy during World War II. Being such a proud veteran, he was very active in the American Legion George R. Bean, Post 79, in Weymouth where he served many years as Commander and Chaplain. Sherman grew up in Rockland and spent most of his life in Weymouth. He belonged to the Idlewell Improvement Association and was a past member of the Trinity Episcopal Church of Weymouth.
Sherman was a retired Labor Foreman for the Boston Housing Authority where he worked for 30 years.
Sherman was the husband of the late Elaine (Norris) Smith and the late Mabel (Litchfield) Smith and is survived by his children, Susan L. Smith and her late husband, Tim Racicot of Whitman, Steven A. Smith and his wife Carol Smith of Abington and Sharlene L. Smith and her husband Jim Delong of Beaufort, SC. He was the brother of the late Irving Smith of Rockland, the late Donald Smith of California and the brother-in-law of Jackie Murray and Richard Murray of Weymouth. He was the loving companion of Terri Henrikson. Sherman also leaves 9 grandchildren, 17 great grandchildren, several nieces and nephews and close family friend Brenda Arinella.
Relatives and friends are respectfully invited to the visiting hours on Thursday, September 6 from 4-8 PM in the C.C. Shepherd Funeral Service located at 134 Pleasant St. (Columbian Sq.) S. Weymouth. Relatives and friends will gather at the Holy Nativity Church, 8 Nevin Rd., S. Weymouth MA on Friday at 10 AM for a funeral service honoring Sherman. Burial will follow in the Blue Hill Cemetery in Braintree.
In lieu of flowers, donations may be made in Sherman’s memory to the George R. Bean, Post 79, 19 Hollis St. Weymouth, MA 02190.

To order memorial trees or send flowers to the family in memory of Sherman L. Smith, please visit our flower store.