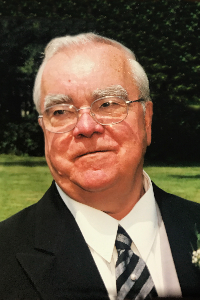 Donald M. Butler, age 83, of S. Weymouth passed away at home surrounded by his loving family on July 9, 2018. Don was born, raised, and educated in S. Boston. He served 6 years in the National Guard before joining the Army 82nd Airborne. Don married his wife of 58 years, Anne, before they shipped off together to be posted in Germany from 1958-1961. They took this opportunity to travel on weekend leaves to places like Luxenberg, Paris, and Belgium. When Don finished in Germany they settled in S. Weymouth where they started a family together.

Don retired from the local 12 Plumber’s union after almost 40 years. He enjoyed water skiing, sailing, and travelling with his wife but above all else Don was a dedicated family man who always made time to watch and partake in his children’s sports games and lives.

Don is survived by his beloved wife Anne Butler (O’Donovan) of Weymouth, his loving children Donald Butler and his wife Lisa of Whitman, Denis Butler of Whitman, David Butler of Weymouth, and Diane Packard and her husband Joseph of Abington. Don is also survived by his cherished grandchildren Matthew, Molly, Danny, Jacob, and Maxx and is the dedicated brother to John Butler and his wife Pat of E. Bridgewater.

Relatives and friends are respectfully invited to the visiting hours for Don on Thursday July 12, 2018 from 4-8pm in the C. C. Shepherd Funeral Home (Columbian Sq.) Weymouth, MA. Relatives and friends will gather in the funeral home at 9AM Friday for a Celebration of Life prior to the Funeral Mass in honor of Don’s life which will be held at 10AM at St. Clare’s Church, Braintree. In Lieu of Flowers donations may be made to St. Jude’s Research Hospital located at 262 Danny Thomas Pl, Memphis, TN 38105.


To order memorial trees or send flowers to the family in memory of Donald Butler, please visit our flower store.