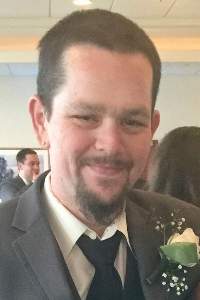 ATTENTION*** - Due to Weather Conditions services for Sean have been moved from Tuesday March 13 to Wednesday March 14, 2018 from 5-8pm with a service at 8pm in the funeral home.

Sean M. Gallagher, age 35, passed away unexpectedly at his home in his sleep on March 8, 2018. Sean was born in Weymouth then was raised and educated in Norton. After school he lived in various South Shore towns before moving to the New Orleans/Gulf Coast area where he spent some of the happiest years of his life. Sean worked on Bourbon Street in New Orleans and enjoyed his work for years. Eventually, he came back home to the South Shore to be with his family. Sean was very passionate about art, whether it be sketching a new tattoo or painting, he loved exploring his creativity. He also loved comics, video games, and fantasy novels but what Sean enjoyed most was spending time with his family most especially his dog Daisy.

Sean is the beloved son of Kevin Gallagher of N. Attleboro and the late Deborah A. Smith-Gallagher, loving brother to Adam Gallagher and his wife Katie of Dorchester, Kelly Heffron and her husband Brian of NH, Devon Gallagher-Sutton of N. Grafton, Morgan Gallagher-Sutton and her significant other John Conway of CT, and the late Cameron Gallagher, and the cherished uncle to Jacob, Jackson, and Lillian. Sean is also survived by his Grandmother Alice Gallagher of Dorchester and many loving aunts, uncles, cousins and friends.

Relatives and friends are respectfully invited to the visiting hours for Sean which will be held on Wednesday, March 14, 2018 from 5-8pm at the C. C. Shepherd Funeral Home located at 134 Pleasant St. (Columbian Sq.) Weymouth, MA 02190. A funeral service will take place immediately following the visitation at 8pm in the funeral home. A celebration of Sean’s life will be announced by family in the coming week.

To order memorial trees or send flowers to the family in memory of Sean Gallagher, please visit our flower store.