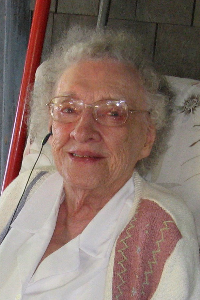 Agnes G. White (Inglis), age 102, passed away peacefully at home surrounded by her loving family on February 28, 2018. She was born in Lawrence and before her family settled in Weymouth when Agnes was twelve, they also spent some years in Methuen and Braintree. Agnes met her husband, Lloyd, while attending the Hunt School. Later, they worked together as volunteers at First Baptist Church of Weymouth where their relationship, and faith, grew and brought them closer. Agnes was a woman of deep faith and was proud to be an 80-year member of First Baptist Church where she got involved in countless activities, groups, committees, and taught Sunday school for over 50yrs.

Agnes’ long fulfilling life ran alongside such important events; two World Wars, changes in political policy, movement of borders, while governments fell and came to rise. Being alive during arguably the most important 102 years of history that have been recorded wasn’t enough for Agnes, during WWII while her husband Lloyd was off to War, she worked at the Hingham and Quincy Shipyards. She spent time working at Weymouth High in the cafeteria, and of course, amongst all of her activities and schedule always had time to spend with her family who is her greatest achievement of all.

Relatives and friends are respectfully invited to the visiting hours for Agnes on Monday, March 5, 2018 from 4-7pm at the C. C. Shepherd Funeral Home located at 134 Pleasant St. (Columbian Sq.) Weymouth, MA 02190. Relatives and friends are invited to the Funeral Service for Agnes which will be held on Tuesday, March 6, 2018 at 10am in the First Baptist Church of Weymouth located at 40 West St. Interment will immediately follow at Mount Hope Cemetery, Weymouth. Donations in memory of Agnes may be made to the New England Wildlife Center at 500 Columbian St. South Weymouth, MA 02190.

To order memorial trees or send flowers to the family in memory of Agnes White, please visit our flower store.