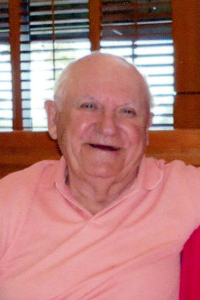 Paul grew up in Wollaston, MA and joined the Marines after high school. After his military career, Paul became an IBEW member and worked as an electrician for E.G. Sawyer company before retiring. Paul and Evelyn established their family in Weymouth, MA where they lived for 35 years before spending their retirement years in Tarpon Springs, FL. They returned to Massachusetts this year and Paul spent his final months surrounded by his loving family.

Relatives and friends are respectfully invited to the visiting hours for Paul on Monday, September 11, 2017 from 4-7:30pm at the C. C. Shepherd Funeral Home located at 134 Pleasant St. (Columbian Sq.) S. Weymouth. A Funeral Service Celebrating Paul’s life will take place in the funeral home immediately following the visitation at 7:30pm. Donations may be made in Paul’s memory to the American Cancer Society at PO Box 7262 Hillsborough, NJ 08844-7262.

To order memorial trees or send flowers to the family in memory of Paul Kappler, please visit our flower store.