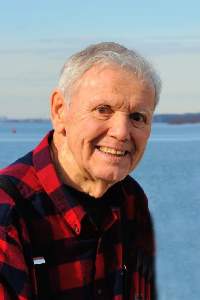 William J. Stefaney, age 89, of Weymouth passed away at home with his family by his side on August 19, 2017. Bill was born in Roslindale, son of Katherine (Bittighoffer) (Stefaney) Nickell and Richard Stefaney. After graduating from Jamaica Plain High, he worked at the Arnold Arboretum as a tree surgeon, before continuing his education at Boston University. Bill served first with the U.S. Naval Submarine Reserves and then with the US Air Force during the Korean War. Then, with the assistance of the G.I. Bill, he attended Boston State Teachers College. Bill worked passionately as a teacher first in Stoughton, Dedham and Puerto Rico, before 30 years in the Milton Schools as a teacher and administrator. He was very active in the U.S. Power Squadron where he taught Junior Navigation and was a member of the Navigator’s Club, and in later year with the Retired Educators Association of Massachusetts. Bill’s skills extended well beyond the classroom: in his youth he enjoyed working backstage at various theaters in Boston and later ran the Milton Junior High Drama Club, he was an amateur magician, and he always found time to spend with his family most especially his beloved grandchildren as their “Grampy”. Bill lived a full life and made many fond memories over the years, vacations with family and friends to Wolfeboro, NH remained closest to his heart.

Bill is survived by his beloved wife of 43 years Catherine (Driscoll) Stefaney of Weymouth, his loving children Mary Stefaney of Weymouth, Julie Volkert and husband Todd of CA, Emily DeLeon and husband Jorge of Shrewsbury, and Thomas Stefaney and wife Kendra of Weymouth, and his cherished grandchildren Katelynn, Liam, Connor, Haley, and Emmett. Bill is also survived by his godchild Shannon, and many loving nieces and nephews. He is predeceased by his parents, his brothers John Stefaney and Richard Stefaney, and by his sister Eleanor Stefaney.

Relatives and friends are respectfully invited to the visiting hours for Bill on Friday, August 25, 2017 from 3-7pm at the C. C. Shepherd Funeral Home located at 134 Pleasant St. (Columbian Sq.) S. Weymouth, MA. Relatives and friends will gather in the funeral home at 9am on Saturday for a Celebration of Life prior to the Funeral Mass at Sacred Heart Church, Weymouth at 10am. Donations in memory of Bill may be made to Hospice of the South Shore for the outstanding care they provided to Bill during his final days at 30 Reservoir Park Dr. Rockland, MA 02370, or to The Friends of the Unborn at P.O. Box 692246, Quincy, MA 02269.

To order memorial trees or send flowers to the family in memory of William Stefaney, please visit our flower store.