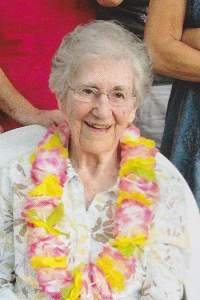 Helen E. (Murphy) Mitchell, age 97, of Weymouth, formerly of Quincy passed away surrounded by her loving family on Monday, August 14, 2017.
Helen was the loving wife of the late E. Charles Mitchell and is survived by her five daughters, Lynne Corbett and her husband Joseph of Litchfield Park, AZ, Lois Viglas and her husband Vic of S. Weymouth, Laurie Mitchell of Hull, Leslie Mitchell of Braintree and Lorraine Pelletier of Rockland, her grandchildren, Mark Viglas and his wife Naomi, Michael Corbett and his wife Olivia, Robert Viglas and his wife Karen, Kevin Corbett and his wife Amy, Michelle Corbett-Kent, Stephen Viglas, Nicholas Pelletier, Andrew Pelletier, Neal Mitchell, Zachary Pelletier and Madeline Pelletier. She also leaves 15 great grandchildren and numerous nieces and nephews.
Helen was the last survivor of thirteen children and was born and lived in Quincy. She worked in the Hingham Shipyard during World War II as a welder on Destroyer Escorts. Helen was a waitress in Gary’s restaurant in Quincy for many years. In her later years, she received a Teacher’s certificate from Quincy Junior College and taught at Jack and Jill Child Care Center in Quincy before retiring in 1997.
The Funeral Service will be private and is in the care of C. C. Shepherd Funeral Home located in Weymouth.
In lieu of flowers donations may be made in Helen’s memory to the City of Quincy for the Veteran’s Council, c/o Quincy City Hall, 1305 Hancock St. Quincy, MA 02169.

To order memorial trees or send flowers to the family in memory of Helen E. Mitchell, please visit our flower store.