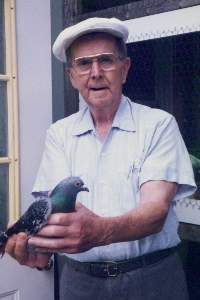 James B. Dever, age 96, of Weymouth passed away on July 15, 2017. Jim was born, raised, and educated in Dorchester. After being honorably discharged from the Navy during WWII where he served on the USS Block Island CVE21 he returned and married his wife, Kathleen. They then moved to Hyde Park where they started a family. They also lived for some time in Braintree before eventually settling in Weymouth where they have resided since 1962. Jim worked as a Boston Police Officer from 1949-1961 before starting Jim Dever and Sons Upholstery, with a storefront in Columbian Square which he operated for many years. He also taught the upholstery class at the North Weymouth High Evening School for twelve years. Jim enjoyed training and racing homing pigeons for most of his life and was a longtime member of the Braintree Pigeon Club. Jim’s true passion was enjoyed spending time with his family.

Relatives and friends are respectfully invited to the visiting hour for Jim on Wednesday July 19, 2017 from 10-11am in the C., C. Shepherd Funeral Home located at 134 Pleasant St. (Columbian Sq.) Weymouth, MA. A service in honor of Jim’s life will take place in the funeral home immediately following the visitation at 11AM. Interment will take place following the service at Mount Benedict Cemetery, Boston at 12:30pm.

To order memorial trees or send flowers to the family in memory of James Dever, please visit our flower store.