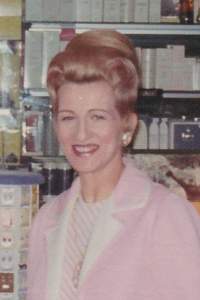 Gisele “Gigi” L. (Fandeleur) Albert, age 89, passed away at her home in Weymouth on Friday, June 16, 2017. She was born at home in a small village in northern France on Nov. 29,1927 at 3 am. By 1940 at the age of 12 she was living under German occupation and would remain so for over 4 yrs. She met a bilingual American G.I. Clarence R. Albert, whom she married in Saint Quentin, France on June 11, 1945, 5 weeks after the Germans surrendered. She was apart from her husband for many months until they were finally reunited in So. Weymouth in 1946 after arriving in New York City by ship with hundreds of other war brides from war torn Europe. She quickly adapted to her new life by learning English, taking on various jobs and starting a family in 1947. She provided childcare, cleaned homes, worked at the Cameo Theater, was a hostess at Red Coach Grill and modeled in Boston for a few years.

She became a naturalized citizen in 1952, going back to France to bury her older sister Suzanne. By 1953, after living in 3 separate places, she and her husband and 6-year-old son, Dana moved into 38 Torrey St. where she lived for 64 years. By the early 60's, she started working at Oldens Pharmacy where she was in charge of the cosmetics counter and became a prominent fixture in the store until 1978, when she had to return to France to bury her mother. She worked at Jordan Marsh in the early 80's for a few years before retiring. She returned to France again in 1985 for 3 months, and visited again for the last time in 1987. Her husband of 59 years, Clarence, passed away in 2004, and she remained at home until she passed away. Over the years Gigi helped many people in so many ways, opening her heart and even her home as a refuge for some who were going through difficult times and had nowhere to go. She became a mother to all of them, especially Brian Beaulieu, Richard MacLaren and the late William Baker Jr.

Relatives and friends are respectfully invited to visiting Hours in honor of Gigi on Thursday, June 29 from 4-8 pm at the C. C. Shepherd Funeral Home located at 134 Pleasant St. S. Weymouth. Gisele will be buried with her parents in France at a later date.


To order memorial trees or send flowers to the family in memory of Gisele L. Albert, please visit our flower store.