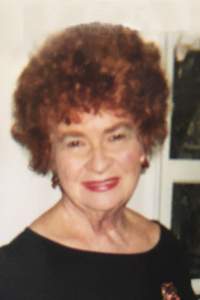 Evelyn J. Montgomery (Trautwein), age 88, of S. Weymouth passed away peacefully on May 7, 2017. Evelyn was born in Flushing, NY then raised and educated in Brooklyn. Even after living in the Boston area for more than 60 years she still considered herself a New Yorker—and proudly kept her accent! She and her first husband Joseph Gervase married and settled in Brooklyn where their son, Tim, was born. Though they divorced early on, Evelyn and Joe remained life long friends. Evelyn later married William Montgomery and, after traveling extensively for a few years due to Bill’s career, they settled in S. Weymouth where their children Glenn and Beverly were born. Evelyn was the first female member of the Milton Kiwanis Club and enjoyed a long career in the hospitality industry. Incredibly hardworking (and maybe a little stubborn), Evelyn’s sense of humor was as boisterous as they come and she loved telling stories and sharing memories of her favorite times in the Catskills and Adirondacks. Her love of nature and the outdoors was rivaled only by her love of music—in particular, Dean Martin, Frank Sinatra and the Big Band Era.

Relatives and friends are respectfully invited to the visiting hours for Evelyn from 4-8 p.m. on Thursday May 11, 2017 in the C. C. Shepherd Funeral Home located at 134 Pleasant St. (Columbian Sq.) Weymouth, MA 02190. Funeral Services for Evelyn will take place on Friday and will be private for family only. In lieu of flowers, please feel free to make a donation in Evelyn’s memory to Music Unites www.musicunites.org.

To order memorial trees or send flowers to the family in memory of Evelyn Montgomery, please visit our flower store.