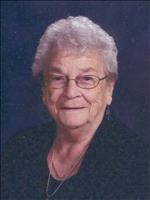 Haroldine A. (Norling) MacLennan, age 85, passed away on Tuesday, March 15, 2016 at South Shore Hospital. Haroldine was the wife of the late William W. MacLennan and is survived by her children, Jean M. MacLennan-Cook and her husband Myles Cook, William H. MacLennan and his wife Patti of Duxbury, Carol L. MacLennan of Weymouth and Robert W. MacLennan and his wife Jeanne of Weymouth, She also leaves her grandchildren, Lisa, Eric, Will, David, Kerri, Nicole, Patrick and Kristi and her great grandchildren Tyler and Keely.
She was born and grew up in Quincy and lived in Weymouth for 18 years before moving to Braintree 40 years ago.
Haroldine was a warehouse worker for Bradlees Department Stores for many years before retiring in 1993. She was an active member of the Old South Union Church in Weymouth for over 50 years, volunteered at the voting Poles in Braintree, active member of the Braintree Council of Aging, was a Past Matron of the Wessagussett Order of Eastern Star, Chapter192 in 1980 and was a Red sox fan. She had a great sense of humor and loved jokes and was an awesome mother and grandmother.
Friends and relatives are respectfully invited to Visiting Hours at the C. C. Shepherd Funeral Home, 134 Pleasant St. (Columbian Sq.) S. Weymouth on Wednesday, March 23 from 4-8 pm. A Celebration of Haroldine’s life will be held at the Old South Union Church, 25 Columbian St. S. Weymouth on Thursday, March 24 at 10 am. Burial will follow at the Mount Hope Cemetery in Weymouth.
If you would like to leave a message for the family please click on the candle.

To order memorial trees or send flowers to the family in memory of Haroldine A. MacLennan, please visit our flower store.