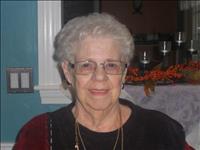 Alice J. Bickel (Anderson), age 86, passed away on Tuesday December 8, 2015. Alice was born, raised, and educated in Newfoundland. She met her beloved husband of 54 years, Donald, when he was there during his time in the Coast Guard. They got married, started a family, and soon after moved to the United States. Since Donald was in the Coast Guard they lived in many states such as Arkansas, Missouri, and then settled in Weymouth, MA in 1961 where Alice has resided for 45 years. She was a member of the Eastern Star and enjoyed cross country trips in her RV to California, Texas, Florida, and Tennessee. They also had a house in Florida for many years. Most of all, Alice enjoyed spending time with her family.

Alice was predeceased by her beloved husband Donald Bickel in 2004. She is survived by her loving children Maxine Steel of Abington, Donna Bickel of Rockland, Darrell Bickel and his wife Barbara of Hanson, Paula Bickel of Abington, Laurie O’Neill and her husband James of Rockland, and the late Carole Abbott and Robert Bickle. Alice is also survived by many loving grandchildren, great-grandchildren, nieces and nephews.

Relatives and friends are respectfully invited to attend the visiting hours for Alice on Friday December 11, 2015 from 4-7pm in the C. C. Shepherd Funeral Home located at 134 Pleasant St. (Columbian Sq.) Weymouth, MA. A service will immediately follow the visitation at 7pm. Burial will be at MA National Cemetery in Bourne and will be private for Alice’s family. If you would like to leave a message for the family please click on the candle.

To order memorial trees or send flowers to the family in memory of Alice Bickel (Anderson), please visit our flower store.